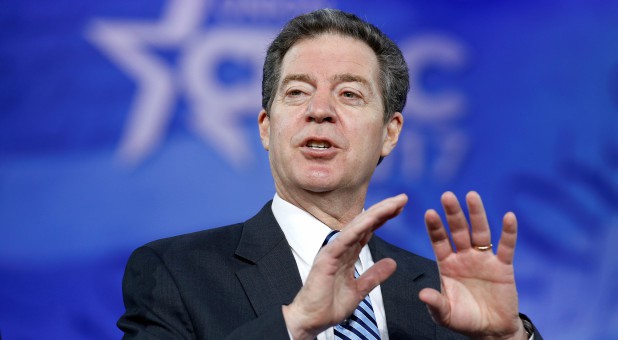 1/25/2018 ABIGAIL ROBERTSON  CBN
Kansas Governor Sam Brownback was confirmed to be ambassador-at-large for International Religious Freedom after a dramatic Senate vote Wednesday.
Vice President Mike Pence raced to the Capitol to cast the tie-breaking 49 – 49 vote to end debate and proceed to a final vote. The vote was in peril because Sen. John McCain, R -- Ariz., is out on medical leave and Senator Bob Corker, R – Tenn., is in Davos, Switzerland, requiring the GOP to get at least one Democrat to support the nomination.
A top senate aide tells CBN News they thought they had at least 15 Democrats in support of Brownback's nomination, but learned that Minority Leader Chuck Schumer, D – New York, was encouraging his fellow Democrats to vote against the Brownback nomination.
President Trump nominated Brownback in 2017, but Democrats blocked a vote because as the governor of Kansas he repealed an executive order prohibiting discrimination against LGBT government workers.
Since the Senate failed to vote to confirm him before the end of the year, the president was forced to re-nominate him in January.
Brownback's confirmation is a big win for those fighting for religious freedom around the world.

"After a long wait, those who have been suffering brutal oppression now have a strong advocate in this vital post. It is essential to promote religious freedom as a cornerstone of our foreign policy, given the global instability caused by the severe religious persecution that 77 percent of the world's population live under. Gov. Brownback has been a passionate defender of the rights of all people to worship freely, and has courageously confronted offenses against human rights in trouble spots around the world throughout his career," said Maureen Ferguson, senior policy adviser with The Catholic Association.
David Curry, CEO of Open Doors USA, says Brownback is a "terrific" solution to a big problem.
"The fact that now we've been without a leader in that role I think is a problem," Curry told CBN News. "Because you have these situations around the world where we need a spokesman who understands these issues in-depth."
Brownback will be in charge of investigating religious freedom violations around the world and submit an annual report of violations to the White House.
"We need a point person," continued Curry. "This is not a partisan issue. Democrat or Republican or independent, you need to care about the religious liberty of others."

Copyright The Christian Broadcasting Network, Inc., All rights reserved.
Connect with God in a deeper way as you read His Word. Select Bibles are now 50% OFF plus Free Shipping and a Free Gift. Show me the Bibles!
Encounter the Holy Spirit and develop a relationship that saturates you in His peace, love and joy. Explore the Life in the Spirit Series.
FREE GIFT! Download Pastor Bill Johnson's 40-page mini eBook, The War In Your Head, and unlock your supernatural lifestyle. CLICK HERE
Posted by Love For His People ministry at 11:13 AM