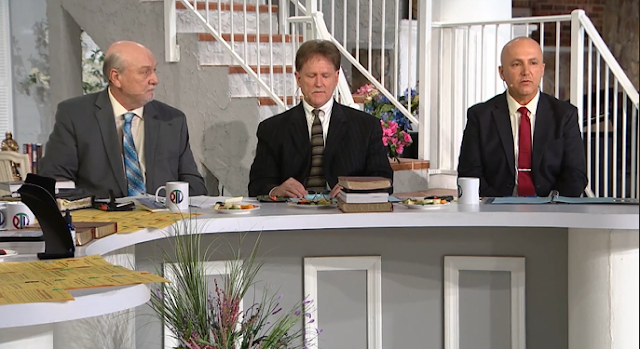 Pastor Jim and Lori welcome special guests Tom Horn, Carl Gallups, and Rabbi Zev Porat as they share on their most recent books: The Rabbi, the Secret Message, and the Identity of Messiah, and The Rabbis, Donald Trump and The Top Secret Plan to Build the Third Temple.
Guests: Tom Horn , Carl Gallups , Rabbi Zev Porat

There’s a lot of great mystical importance both to Christians and also Jews involving that territory that the Golan encompasses. -Tom Horn
Donald Trump isn’t like the last dozen president we had that said Jerusalem ought to be identified and then never do nothing. He said Jerusalem is the eternal capital of Israel, then he moved our embassy there. -Tom Horn

Isaiah 49:12 MEV See, these shall come from afar; and these will come from the north and from the west, and these from the land of Sinim.
2 Corinthians 3:16 MEV Nevertheless when anyone turns to the Lord, the veil is removed.
Mark 16:18 KJV They shall take up serpents; and if they drink any deadly thing, it shall not hurt them; they shall lay hands on the sick, and they shall recover.
Philippians 4:13 MEV I can do all things because of Christ who strengthens me.
Matthew 4:13 MEV And leaving Nazareth, He came and lived in Capernaum, which is by the sea, in the regions of Zebulun and Naphtali.
Ezekiel 5:5 MEV Thus says the Lord God: This is Jerusalem. I have set it in the midst of the nations, with countries that are all around her.
Deuteronomy 32:8 MEV When the Most High gave the nations their inheritance, when He separated the sons of man, He set the boundaries of the peoples according to the number of the children of Israel.
Zechariah 14:4 MEV On that day His feet will stand on the Mount of Olives, which is to the east of Jerusalem. And from east to west the Mount of Olives will be split in two halves by a very great valley so that one half moves to the north and the other to the south.
2 Thessalonians 2:4 MEV Who opposes and exalts himself above all that is called God or is worshipped, so that he sits as God in the temple of God, showing himself as God.
Daniel 12:11 MEV “From the time that the daily sacrifice shall be taken away and the abomination that makes desolate set up, there shall be one thousand two hundred and ninety days.”
1 Thessalonians 5:2 MEV For you know perfectly that the day of the Lord will come like a thief in the night.