Archeology
Impressive remains of a large Jewish village from the Hasmonean period have been discovered during an excavation conducted by the Israel Antiquities Authority in the Sharafat neighborhood of Jerusalem.
The excavation reveals a town from between 40 and 116 BCE, the period in which the famous "Maccabee" family defeated the Greek conquerors and reestablished Jewish rule over the Land. The Hasmonaean/Maccabee dynasty eventually expanded into the regions of Samaria and the Galilee, reaching as far north as Lebanon and Syria, and south covering the Jordan Valley, the Dead Sea and Idumea (Moab) in southern Jordan. Modern scholars refer to this period as an independent kingdom of Israel. The Hasmonean dynasty survived for 103 years before yielding to the half-Jewish Herod the Great (an Idumean) as king in 37 BCE. Herod made Judea a Roman client state and ordered the killing of all male Jewish infants when he heard that “the King of Jews was born in Bethlehem.”
The Maccabee town on the east side of Jerusalem and not far from Bethlehem has so far yielded remains of a large wine press containing fragments of many storage jars and one of the largest mikvahs, or ritual baths, ever found in Israel. Early Jewish followers of Jesus were known to use these miqvehs for ritual baptisms. An impressive olive press, a water cistern, rock quarries and other constructions revealing a large, industrious Maccabean village have also been found.
A significant find in the town is the unusual and extravagant burial site which includes an entrance hallway leading into a large courtyard carved into the bedrock. The courtyard includes a stone bench along the entire circumference and a cave with numerous chambers chiseled into the walls that served as tombs. The burial cave was sealed in accordance with the orthodox restrictions against disturbing the dead.
Ya'akov Billig, director of the excavations on behalf of the Israel Antiquities Authority, stated: “It seems that this burial estate served a wealthy or prominent family during the Hasmonean period. The estate was in use for a few generations as was common in that era.”
Large elaborate building stones common during the Second Temple period were also found at the burial estate, including a Doric heart-shaped pillar capital. This as well as few cornice fragments found were used at the time as decorative stone and marble work on important buildings. Such quality craftsmanship of architectural elements is very rare. These types of ornamental burial sites have been uncovered in Jerusalem’s Kidron Valley, where a priestly family called Benei Hazir are buried, as well as at several tombs in Jerusalem’s Sanhedriah neighborhood where members of the ancient Sanhedrim were interred.
A large columbarium cave, a rock-cut dovecote or structure to house pigeons or doves, was also discovered at the site. Doves were an important commodity during biblical times providing for the prescribed sacrificial offerings at the temple. They were also bred for their meat and eggs. Columbarium caves designed for breeding the doves are a known feature in the Jerusalem area.
Only a small section of the Hasmonaean village has so far been excavated. Even these limited finds indicate an important agricultural town during the days leading up to the coming of Jesus the Messiah that produced wine and olive oil, as well breeding doves for priests and local residents to bring up to the Temple for sacrifice.
Want more news from Israel?Click Here to sign up for our FREE daily email updates
Posted by Love For His People ministry at 7:48 AM No comments: Links to this post 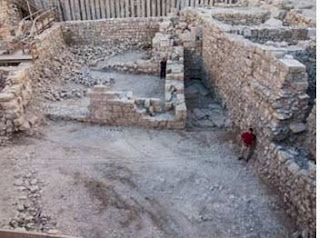 Israeli archaeologists have uncovered a first-ever find in Jerusalem: an impressive building dating to the second century B.C., the time period of the famous Maccabee family, the Israel Antiquities Authority announced this week.
The family is associated with the holiday of Hanukkah.
The discovery is from the Hasmonean Period, when the Hasmonean Dynasty ruled ancient Judea and surrounding areas from 141-37 B.C. It began with a descendant of the Maccabees, Simon Maccabaeus, some two decades after his brother, Judas the Maccabee (hammer) defeated the Seleucid army in a rebel revolt.
The Seleucids imposed their Greek culture on the Jewish people and forbid them to keep the Sabbath and circumcise their sons - both Biblical commandments.
They also defiled the Temple in Jerusalem by erecting idols and sacrificing a pig on the altar of God.
The Maccabees led the revolt against the Seleucids and eventually rededicated the Temple in Jerusalem. Hanukkah means "dedication."
Despite more than 100 years of excavations, this is the first time such a building was found.
"This discovery bridges a certain gap in Jerusalem's settlement sequence," excavation directors Dr. Doron Ben Ami and Yana Tchekhanovets said.
"The Hasmonean city, which is well-known to us from the historical descriptions that appear in the works of [the Jewish historian] Josephus, has suddenly acquired tangible expression," they said.
Numerous pottery vessels and more than 40 silver and bronze coins were also found in the building.
The building in the City of David just outside Jerusalem's Old City Walls is about four meters (about 13 feet) tall and covers an area of around 64 square meters.
It's walls are more than three feet thick and are made of roughly hewn limestone blocks arranged as headers and stretchers.
"These indicated the structure was erected in the early second century BCE and continued into the Hasmonean period, during which time significant changes were made inside it," the IAA said.
Posted by Love For His People ministry at 7:12 PM No comments: Links to this post