Field Report: Syrians are Cheering Israeli Airstrikes on Their Country

Support for Israel Growing among Syrians and Druze on Golan Heights
Reporting about Syria is a difficult job since there are few foreign reporters in the country due to the dangers they encounter, and because of the amount of fake news about the Syrian war, which is mainly coming from Iranian media and Syria’s state-controlled media.
So when I got a report about Syrians celebrating Israeli airstrikes on their country I thought this was fake news, too.
The Syrian Observer, an independent online news service on Tuesday published a report which was written by an anonymous Syrian citizen reporter who operates under the name ‘Ana Insan’ ("I am a human" in Arabic) and edited by Malek Abu Khair.
The report claimed that Syrians were posting joyful tweets and posts on social media “whenever there is news of Iranian, Hezbollah or Syrian regime positions being hit by Israeli warplanes.”
The author also reported that pro-Assad-regime supporters do the same whenever the Russian air force bombs civilian sites and villages in the Idlib Province in northwest Syria, where the Syrian army and the Russians are trying to take over the region by using ruthless force.
‘Ana Insan’ wrote that there is, however, a stark difference between the celebrations of pro-Assad supporters and opponents of the Syrian regime.
The first group “celebrates the bombing of Iranian positions, chosen carefully without images showing the extent of the damage, being a purely military site, and which are kept silent about because they are military secrets,” according to the author of the report.
The second group is “celebrating Russian bombardments accompanied by regime barrel bombs of sites that are mostly houses and villages, along with dozens of bloody images of crimes against civilians, most of them buried under the rubble of their own homes,” Ana Insan wrote.
The citizen reporter was criticized by an Egyptian, who sent a message apparently from a Syrian asking "how Ana Insan and other Syrians could be celebrating an Israeli bombardment of their territory?"
Ana Insan then sent the Egyptian “17 bloody and terrifying images of the bombardment on Idlib’s villages” and wrote that one of those celebrating the Israeli aerial bombardments had lost a number of relatives as a result of these bombings.
To verify if there could be truth in the Syrian Observer report, I traveled to my Druze sources in the village of Majdal Shams at the foot of Mount Hermon on the Golan Heights.
During the now 8-year-old Syrian civil war and my four-year stint as Middle East reporter for the Arizona-based news site The Western Journal, these sources often proved to be of value when I wanted to find out what really was going on in Syria.
Hamad (not his real name, which I can’t publish to protect his family in the Syrian Druze village Khader opposite Majdal Shams), one of my sources and a Druze shopkeeper in Majdal Shams, confirmed the Ana Insan report and said that things are often much more different than the picture that is painted by the official media.
The Druze shopkeeper and my other Druze sources in Majdal Shams all have relatives in Syria, many of them living in Khader, but also in Suweida, which is a mainly Druze region in Syria also known by the name “Druze Mountain.”
They are in constant contact with these relatives and also follow Arabic-language reporting on Syria.
Hamad told me that people in territories that were re-conquered by the Assad regime and its Iranian and Russian allies live in constant fear.
His uncle who used to live in Khader was executed for posting a critical message about Assad on Facebook last year. Others disappeared or went into hiding to escape arrest after the regime and its Shiite militia allies retook control of Kuneitra and Daraa Province, which is bordering both Israel and Jordan.
Hamad also reported that Druze in Majdal Shams have been staging pro-Assad demonstrations to protect their relatives on the Syrian side of the border. This is done to give Assad the impression that the Druze on the Golan Heights are still supporting the regime. The same goes for the Druze in Syria, according to the shopkeeper.
He said that many younger Druze on the Israeli Golan Heights are currently contemplating application for Israeli citizenship now that the US government has recognized Israeli sovereignty over the mountainous plateau.
The support Assad still enjoys among the Druze on the Israeli Golan Heights is rapidly shrinking, my source claimed, while emphasizing that only the elders in Majdal Shams are still dreaming of returning to Syria one day.
About 20,000 Druze live on the Israeli Golan Heights, while 110,000 more live in other parts of northern Israel. Druze in Lebanon, Syria and Israel mainly live in high places because of a long history of persecution at the hands of Muslims.
“The Jews and we have one thing in common,” Hamad said. “We know how to lay low and to protect our community,” he added, referring to the long history of persecution of Jews in Europe.
PHOTO: Flash90
Want more news from Israel?Click Here to sign up for our FREE daily email updates
Posted by Love For His People ministry at 10:43 AM No comments:

Posted by Love For His People ministry at 8:55 AM No comments:

Posted by Love For His People ministry at 5:06 AM No comments:

'I'd Still Be Going to Hell': Steve Harvey Tells of Salvation After Gospel Singer's Prophecy Brings Him to Tears - CBNNews.com

Posted by Love For His People ministry at 5:02 AM No comments:

Email ThisBlogThis!Share to TwitterShare to FacebookShare to Pinterest
Labels: 'I'd Still Be Going to Hell', Brings Him to Tears, CBNNews.com, Salvation After Gospel Singer's Prophecy, Steve Harvey

'Pray For Us All!' Storm Damage Makes Midwest Look 'Like Someone Dropped a Bomb in Our City' - CBN News 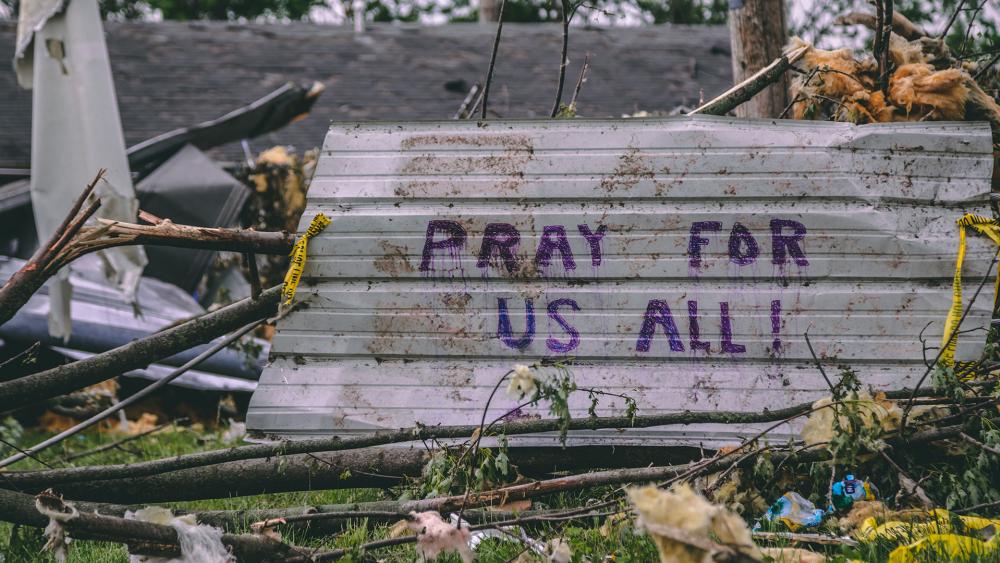 Tornado aftermath in Dayton, Ohio (Photo: Operation Blessing)
'Pray For Us All!' Storm Damage Makes Midwest Look 'Like Someone
Dropped a Bomb in Our City'

05-30-2019
CBN News
More tornadoes struck the Midwest Wednesday, at least two twisters touching down in northern Texas, damaging homes and injuring at least one person.
One resident says the storm saying it felt like it was actually suctioning them up.
Storm survivor Linda Myers said, "I saw the door moving and I had a hold of her arm and I was like, 'Lord please don't suck her out', because for a minute it was just so strong, it was like going in and out. But thankfully the door didn't open and we were all good in the hall."
Related 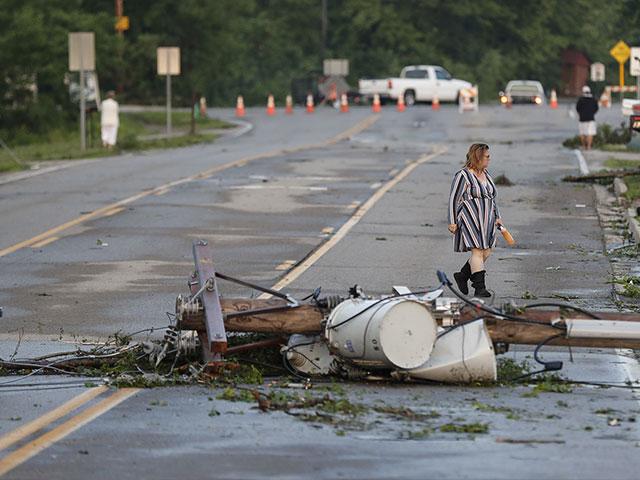 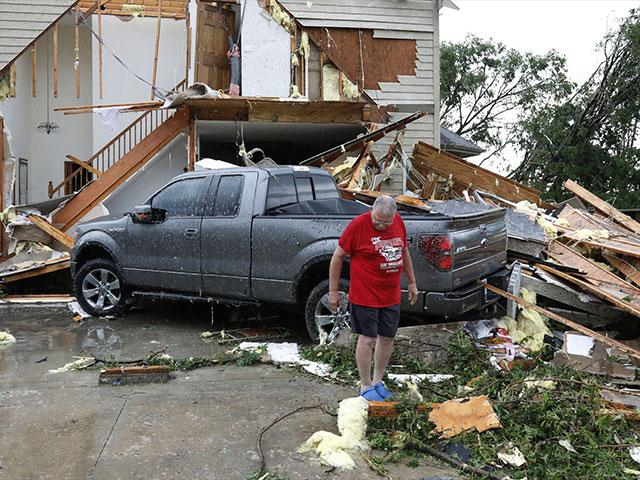 The Texas twisters were bad, but not as massive as the mile-wide, EF-4 tornado with top winds of 170 miles an hour that churned up cities and towns west of Kansas City.
With more than 500 tornadoes reported in the last 30 days, May is now the most active month of tornadoes since 2011.
Meanwhile, rivers in Oklahoma and Arkansas are overflowing their banks. Tulsa's mayor calls it the worst flooding in the state's history, telling residents near levees to "relocate."
Eight states along the Mississippi River are seeing the longest lasting floods in 90 years. The continuous rains make this the worst flood season since 1927.
Meanwhile, CBN's Operation Blessing is on the ground in the Dayton, Ohio area where 13 tornadoes were recorded Monday night.
The Operation Blessing crew reports, "We drove past houses where the roofs were ripped off and debris was strewn across the road, and came to a stop in front of something that let me know we were exactly where we were supposed to be. There was a sign – a piece of mangled tin ripped off someone's roof, cast among a pile of shattered tree branches – with these words scrawled across the surface in purple and blue marker: Pray For Us All!"
You can help meet the needs of these tornado victims - click here to help Operation Blessing.
Operation Blessing has connected with Dayton Vineyard Church which will be used as a relief facility.
"It looks like someone dropped a bomb in our city," the church's Worship Pastor Drew Pinson told Operation Blessing.
"There was a specific neighborhood we drove through," Drew continued, "and I just started crying. I thought to myself, 'This is my city.' Just a few moments later, we braced ourselves to enter what many at Dayton Vineyard Church described as a 'war zone'."
Operation Blessing teams are assessing damage and setting up a base of operations for volunteers to help clean-up debris. Water is a huge need in the area.
OB's US Disaster Response, along with the Hunger Strike Force, is bringing a truckload of water, disaster relief kits, hygiene items and pre-packaged meals. Their mobile command center is also on its way, along with trucks carrying suplies and tools for volunteers.
Posted by Love For His People ministry at 4:59 AM No comments:

Email ThisBlogThis!Share to TwitterShare to FacebookShare to Pinterest
Labels: 'Like Someone Dropped a Bomb in Our City', 'Pray For Us All!', CBN News, Midwest, Storm Damage, tornadoes, twisters
Newer Posts Older Posts Home
Subscribe to: Posts (Atom)