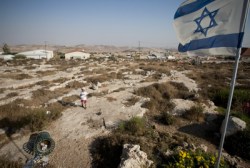 Some 200 Christians traveled to the threatened Jewish community of Migron in Samaria on Sunday to stand in solidarity with the pioneering Jews who live there.

Despite being originally established with tacit government approval and the cooperation of the Israeli army, Migron has been repeatedly targeted for uprooting as an "illegal" settlement outpost. Most recently, the government of Israel ordered the destruction of the village's first three permanent homes. The rest of the residents have lived for years in trailer homes.

The Palestinian Arabs and the international community claim such outposts are the primary obstacle to peace in the region.

But Jan Willem van der Hoeven and the pilgrims joining him for the International Christian Zionist Center's (ICZC) Feast of Tabernacles celebration brought a different message.