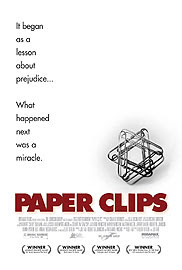 A middle school project teaching tolerance in a small Tennessee city turned into a world-renowned memorial to the victims of the Holocaust. Poster from 2004 documentary film
The Paper Clips Project, by middle school students from the small southeastern Tennessee town of Whitwell, created a monument for the Holocaust victims of Nazi Germany. It started in 1998 as a simple 8th-grade project to study other cultures, and then evolved into one gaining worldwide attention. At last count, over 30 million paper clips had been received. Paper Clips, an award-winning documentary film about the project, was released in 2004 by Miramax Films.[1]

In 1998, Linda M. Hooper, principal of Whitwell Middle School in Whitwell, Tennessee, asked Assistant Principal David Smith to find a voluntary after-school project to teach the children about tolerance. David Smith and Sandra Roberts started a Holocaust education program and held the first class in the fall of 1998. Soon the students were overwhelmed with the massive scale of the Holocaust and asked Mrs. Hooper if they could collect something to represent the lives that were exterminated during the Holocaust. Mrs. Hooper responded that they could if they could find something that related to the Holocaust or to World War II. Through Internet research, the students discovered that Johan Vaaler, a Norwegian, designed a loop of metal, and the Norwegians wore paperclips on their lapels during World War II as a silent protest against Nazi occupation. The students decided to collect 6,000,000 paper clips to represent the estimated 6,000,000 Jews killed between 1939 and 1945 under the authority of the Nazi government of Adolf Hitler.
At first the project went slowly, as it did not gain much publicity. Students created a website and sent out letters to friends, family and celebrities. The project began to snowball after it received attention from Peter and Dagmar Schroeder, journalists who were born in Germany during World War II and who covered the White House for German newspapers. They published some articles as well as a book, Das Büroklammer-Projekt(The Paper Clip Project) published in September 2000, that promoted the project in Germany. The big break in the US came with an article in the Washington Post on April 7, 2001, written by Dita Smith.

Almost all observers note the much-unexpected location of the project. The small rural town of Whitwell has about 1,600 residents and, according to the U.S. census, 97.35 percent of them are white. There was not a single Jew among the population of 425 students when the project began. Out of the 425 students that attend the school, there are only five African Americans and one Hispanic person.
About 40 miles away is the Rhea County Courthouse, where, in 1925, a teacher was convicted for teaching evolution during the Scopes "Monkey" Trial. The trial upheld a statute which outlawed teaching any theory that denies the Divine Creation. A hundred miles from Whitwell, in Pulaski, Tennessee, the infamous Ku Klux Klan was reportedly born.
The city is quite poor, as its main business, coal mining, started to decline after an accident 30 years ago; the last mine was shut down completely in 1997. About half of the students at the middle school qualify for thefree lunch program, which is a benefit for lower-income American school children.

Paper clips were chosen in part because some people from Norway wore them on their lapels as a symbol of resistance against Nazi occupation during World War II (Norwegian Johan Vaaler is often credited with the invention of the paper clip; while he did indeed invent a paper clip, it was not the type used today.)
The paper clips were sent by various people by mail; the letters came from about 20 different countries. Some celebrities, like George W. Bush, Bill Clinton, Bill Cosby, Steven Spielberg, Tom Bosley and Tom Hankswere among those mailing in the clips. As of the summer of 2004, the school had collected about 24 million paper clips. As of 2005, more were still coming in. Most letters contain a story or a dedication of the attached paper clips to a certain person. Some of these stories are shared in the film.

The Children's Holocaust Memorial consists of an authentic German transport car (which arrived in the Baltimore seaport on September 9, 2001) surrounded by a small garden. The railcar is filled with 11 million paper clips (6 million for murdered Jews and 5 million for Roma, Catholics, homosexuals, Jehovah's Witnesses, and other groups). The monument was uncovered on the anniversary of the Kristallnacht, November 9, 2001.[2][3]
Linda Pickett sculpted eighteen butterflies of twisted copper which are embedded in concrete around the railcar. Butterflies came from a poem written by a child who lived in Terezin concentration camp in 1942 (I Never Saw Another Butterfly) and the number 18 in Hebrew symbolizes life (in Gematria, 18 is the numerical value of the word חי, pronounced Chai, meaning life). Inside the railcar, besides the paper clips, there are the Schroeders’ book and a suitcase filled with letters of apology to Anne Frank by a class of German schoolchildren.
A sculpture designed by an artist from Ooltewah, Tennessee stands next to the car, memorializing the 1.5 million children murdered by the Nazis, and incorporating another 11 million paper clips.

Main article: Paper Clips (film)
The 2004 documentary film Paper Clips was directed by Elliot Berlin and Joe Fab. It was made to describe the project and highlight what was done.

In 2006 the Jewish Motorcyclists Alliance and Yidden on Wheels, a Toronto-based Jewish motorcycle club, organized a ride from points across North America to Whitwell, TN to commemorate the Paperclip Project and in honor of the Holocaust's victims. The ride was also a fundraiser for that school, with over $35,000 being raised to help the school buy Promethean boards, a next generation interactive blackboard.[4]
Mitchell Belman, a Toronto-based filmmaker, captured the essence of this ride in his documentary Paper Clips: A Ride to Remember.[citation needed]

Posted by Love For His People ministry at 7:20 AM