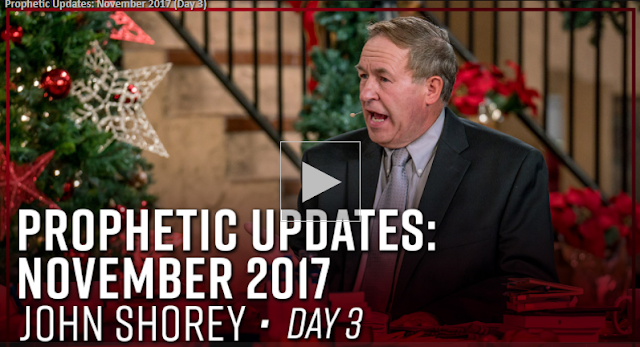 Pastor Jim and Lori Bakker welcome back John Shorey as he shares the latest updates in the prophetic.

Satan wants to destroy the church and wants to stop the fulfillment of God’s Word, but it’s not going to work. -John Shorey
When the nation is in fear they’re going to be looking for answers. -John Shorey

Revelation 12:7 NKJV And war broke out in heaven: Michael and his angels fought with the dragon; and the dragon and his angels fought.
Revelation 12:12 NIV Therefore rejoice, you heavens and you who dwell in them! But woe to the earth and the sea, because the devil has gone down to you! He is filled with fury, because he knows that his time is short.
Matthew 24:8 KJV All these are the beginning of sorrows.
Revelation 12:1-2 NKJV Now a great sign appeared in heaven: a woman clothed with the sun, with the moon under her feet, and on her head a garland of twelve stars. Then being with child, she cried out in labor and in pain to give birth.
Revelation 13:16 NKJV He causes all, both small and great, rich and poor, free and slave, to receive a mark on their right hand or on their foreheads.
Revelation 14:6-7 NKJV Then I saw another angel flying in the midst of heaven, having the everlasting gospel to preach to those who dwell on the earth—to every nation, tribe, tongue, and people— saying with a loud voice, “Fear God and give glory to Him, for the hour of His judgment has come; and worship Him who made heaven and earth, the sea and springs of water.”
Revelation 14:9-10 NKJV Then a third angel followed them, saying with a loud voice, “If anyone worships the beast and his image, and receives his mark on his forehead or on his hand, he himself shall also drink of the wine of the wrath of God, which is poured out full strength into the cup of His indignation. He shall be tormented with fire and brimstone in the presence of the holy angels and in the presence of the Lamb.
Hebrews 10:25 KJV Not forsaking the assembling of ourselves together, as the manner of some is; but exhorting one another: and so much the more, as ye see the day approaching.
Revelation 14:13-15 NKJV Then I heard a voice from heaven saying to me, “Write: ‘Blessed are the dead who die in the Lord from now on.’” “Yes,” says the Spirit, “that they may rest from their labors, and their works follow them.” Then I looked, and behold, a white cloud, and on the cloud sat One like the Son of Man, having on His head a golden crown, and in His hand a sharp sickle. And another angel came out of the temple, crying with a loud voice to Him who sat on the cloud, “Thrust in Your sickle and reap, for the time has come for You to reap, for the harvest of the earth is ripe.”
2 Corinthians 11:25 NIV  Three times I was beaten with rods, once I was pelted with stones, three times I was shipwrecked, I spent a night and a day in the open sea.
Luke 21:25 NKJV Three times I was beaten with rods, once I was pelted with stones, three times I was shipwrecked, I spent a night and a day in the open sea.
Acts 2:21 KJV And it shall come to pass, that whosoever shall call on the name of the Lord shall be saved.
Matthew 24:6 KJV And ye shall hear of wars and rumours of wars: see that ye be not troubled: for all these things must come to pass, but the end is not yet.
1 Kings 22:22 KJV And the Lord said unto him, Wherewith? And he said, I will go forth, and I will be a lying spirit in the mouth of all his prophets. And he said, Thou shalt persuade him, and prevail also: go forth, and do so.
Matthew 25:40 NKJV And the King will answer and say to them, ‘Assuredly, I say to you, inasmuch as you did it to one of the least of these My brethren, you did it to Me.’
Luke 21:7 MEV They asked Him, “Teacher, when will these things be, and what will be the sign when this is about to happen?”
Matthew 25:12 KJV But he answered and said, Verily I say unto you, I know you not.
Matthew 7:23 KJV And then will I profess unto them, I never knew you: depart from me, ye that work iniquity.
Galatians 6:7 KJV Be not deceived; God is not mocked: for whatsoever a man soweth, that shall he also reap.

Posted by Love For His People ministry at 6:20 AM