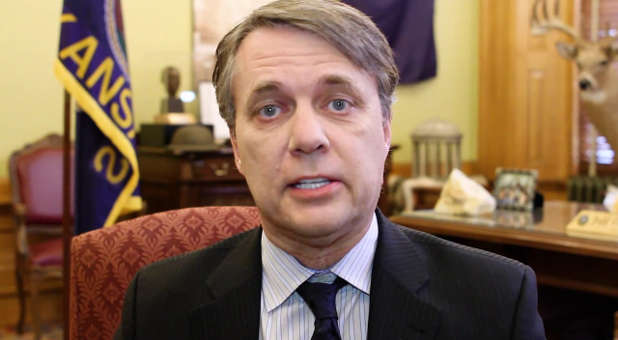 3/23/2018 LORIE JOHNSON/CBN NEWS
The state of Kansas is standing firm on its refusal to give Medicaid money to America's biggest abortion provider, Planned Parenthood.
In fact, Republican Gov. Jeff Colyer is taking the matter to the highest court in the country. Colyer, a Catholic and a surgeon, maintains a vigorous pro-life stance.
"A Kansas Court issued a ruling which argues the framers of the Kansas Constitution imagined abortion as a separate constitutional right. This is violence against basic facts. This cannot stand. We are a pro-life state. On the issue of life, the stakes are so high, the issue is so foundational," he said in a February speech.
The state of Kansas filed a petition Thursday asking the U.S. Supreme Court to review a lower court's decision that prevented Kansas from ending its Medicaid contract with Planned Parenthood.
The issue dates back to 2016 when then-Gov. Sam Brownback stripped Planned Parenthood of its Medicaid funding. Medicaid is taxpayer money used to pay for medical services provided to people who are needy or disabled.
Two Planned Parenthood affiliates in Kansas had been receiving up to $50,000 from Medicaid. Although Planned Parenthood provides abortions, they contend Medicaid dollars are used to pay for health care services such as birth control and cancer screenings.
CBN News contacted Planned Parenthood for a comment. Earlier, they said the state had no right to take away their Medicaid funding because they say patients who are eligible for Medicaid have the right to choose for themselves their medical providers and the state is not allowed to deprive the patients the services provided by Planned Parenthood.

The 10th Circuit Court of Appeals agreed. Last month they ruled that Kansas lacked the authority to block dollars from going to a medical provider "for any reason they see fit, especially when that reason is unrelated to the provider's competence and the quality of the health care it provides."
However, Gov. Colyer fired back, saying, "Kansas is a pro-life state, and Kansans don't want state dollars being used to support abortion providers.
"The medical needs of Kansas women will continue to be met by other providers in the Medicaid and KanCare network. We want the Supreme Court to weigh in on this issue and we look forward to the outcome," he said.
Interestingly, the newest Supreme Court Justice, conservative-leaning Neil Gorsuch, was a judge on the 10th Circuit when this case was originally argued before that court.
For that reason, Gorsuch may have to recuse himself from further proceedings regarding this case. That leaves eight justices on the high court to decide whether to hear the matter. Those eight appear to be evenly split on the issue of abortion. Five are needed to agree to consider the Kansas case.

Reprinted with permission from CBN.com. Copyright The Christian Broadcasting Network, all rights reserved.
Posted by Love For His People ministry at 10:48 AM