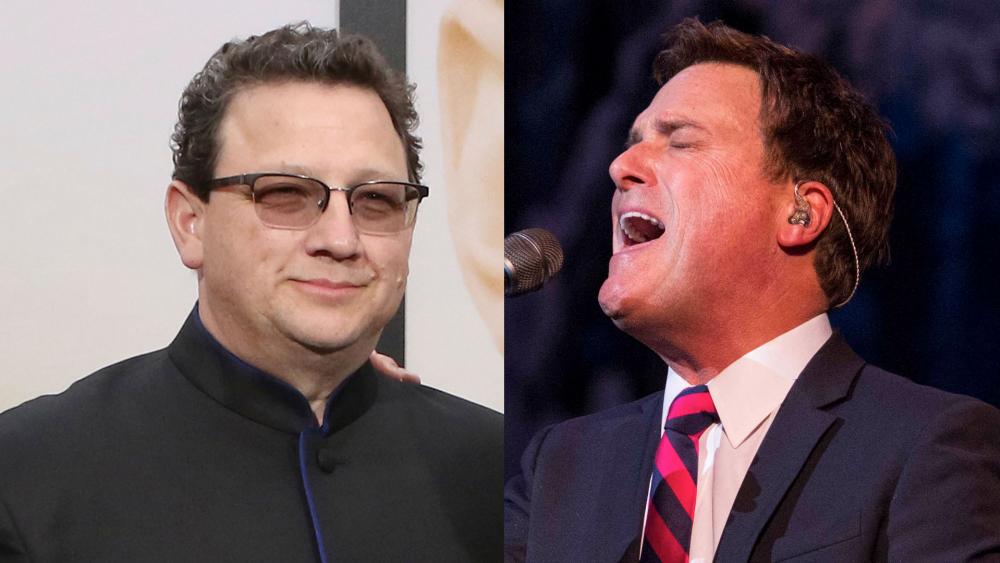 Kevin Jonas, left, will team with Grammy Award-winning Michael W. Smith for newly created
Michael W. Smith Center for Commercial Music at the Liberty School of Music this August.
(Images credit: AP)
Michael W. Smith and Kevin Jonas Join for New Music Collab at Liberty University
07-18-2019
CBN News Steve Warren
Liberty University has announced that Grammy Award-winning artist Michael W. Smith will team with Kevin Jonas, the father, and original manager of the rock group The Jonas Brothers, for the newly created Michael W. Smith Center for Commercial Music, which will be a part of the Liberty School of Music later this summer.
Smith will serve as the Lynchburg, VA center's director. Jonas will work with Liberty students to record and publish their records as well as promoting their talent to the world.
Jonas, a music prodigy-turned-Assemblies of God pastor, met his wife, Denise, on their first day at the Christ for the Nations Institute in Dallas. He went from directing worship for Christ for the Nations and Assemblies of God churches to directing their sons' music careers, according to Good Housekeeping.
In addition to the new center, a new recording label with a brand new $2 million recording studio will also operate from the school with the goal of attracting new and already successful recording artists from across the country.
Artists will also come to Liberty to help train students to be the next generation of music professionals, according to the university.
The center is scheduled to open Aug. 1.
The university hopes the new center and the "Liberty Music Group" label will not only give students the real-world experience of professionally recording an album but will also attract mainstream and Christian artists to sign with the new music label.
Former Christian recording artist and music industry executive Al Denson has been a key player in securing Smith, Jonas, and others in this unique partnership. As Liberty's commercial music industry liaison, Denson will bring in artists who have the passion to work with budding musicians who were once in their place.
"These artists remember how hard it was starting out, working years and years to have the opportunity to record on a major label," Denson said in a press release. "So when they have a chance to give back to those who are really wanting to seek what they did and walk down the same path, they are more than willing and excited to invest in them. It's magnetizing to get around students who are hungry when you know how it feels yourself. The artists just need a place that has integrity and supportive staff who care, and that's why the match with Liberty makes it so good."
"The passion we have is not just to train a bunch of people to go into the music industry — or just go into the Christian music industry, for that matter — but to be equipped as musicians that go into the music industry fully equipped to do what they believe God's called them to do, whether it's the mainstream market or the faith-based market," Vernon M. Whaley, dean of the School of Music told Religion World News.
Several existing programs will also be located in the new center, including a Bachelor of Music in commercial music with emphases in artist development; songwriting; recording, engineering and producing; publishing and producing; or film score production.
Liberty is among the top 10 largest schools of music in the country. With the expansion into commercial music, Whaley said the school is expecting 27 percent growth in enrollment next year and up to 47 percent in the next two years.
Posted by Love For His People ministry at 5:05 AM