Romney: Deeply moving to be in Jerusalem, Israel's capital

Romney: Deeply moving to be in Jerusalem, Israel's capital 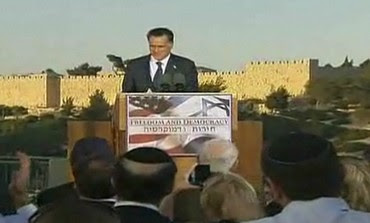 
US Republican presidential candidate Mitt Romney delivered a foreign policy speech in Jerusalem on Sunday, saying it was a deeply moving experience to be in Jerusalem, "the capital of Israel."

Romney stated that not only did Israel and the US hold shared interests, the two countries hold "shared values," despite the 5000 miles between them.

Addressing Iran, Romney said that the US has a "solemn duty" not to let Iran's leaders act on their malevolent intentions toward Israel. He stated that history teaches that when despotic regimes secure weapons, peace gives way to violence.


Romney added that while he hopes diplomatic measures and economic sanctions will stop Iran's nuclear drive, no option should be excluded to stop a nuclear Iran.
Romney called Israel's security a "vital national interest" of the US. "Israel must defend itself and it is right for us to stand with you," said Romney.

In what appeared to be veiled criticism of US President Barack Obama, Romney said that standing by Israel meant more than just providing military aid. He said that the diplomatic distance between the US and Israel serves to embolden Israel's enemies.

Following the Olympic Committee's decision not to hold a minute of silence to remember the 11 Israeli victims of the 1972 Munich Olympics terror attack, Romney made a point to honor the victims in his speech, which was met by applause from the audience.

The Republican candidate praised Israel, the "start-up nation," for its "cutting-edge technology," thriving economy, democratic values and freedom of press.

"I love this country, I love America, I love the friendship we have," Romney stated as he concluded his speech.

Following his speech, Netanyahu thanked Romney for his warm words. On his part, Romney wrote the prime minister a letter thanking him for his warm hospitality and lasting friendship. "Your service for peace is an inspiration," he wrote.

Before taking off, he is scheduled to host a fund-raiser at the King David Hotel in Jerusalem on Monday morning.

Posted by Love For His People ministry at 10:26 AM No comments: Links to this post