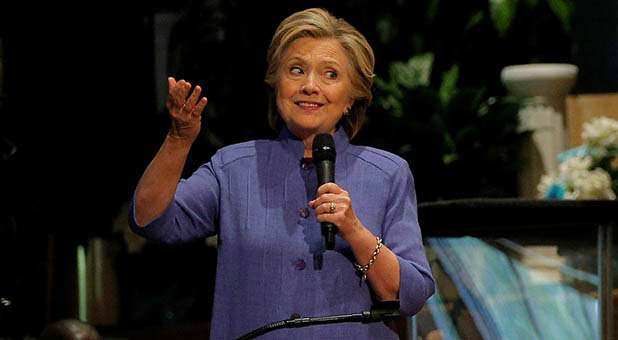 10/31/2016 BOB ESCHLIMAN  CHARISMA NEWS
Last weekend was perhaps the most explosive of the entire 2016 presidential election cycle with FBI Director James Comey's letter to Congress signaling the bureau was again looking into Democratic presidential nominee Hillary Clinton's private email server.
In a nutshell, this is what we know, so far: During its investigation of former U.S. Rep. Anthony Weiner—the estranged husband of Clinton's longtime aide, Huma Abedin—the FBI discovered approximately 650,000 emails. A cursory search for keywords indicated there were emails related to the private server investigation, which the bureau now has a search warrant to begin reading.
Donald Trump's campaign has pounced on the news, and the Clinton campaign is suddenly demanding "transparency" from the FBI. Even the liberal mainstream media picked up on the story, which in and of itself is perhaps one of the biggest headlines of the weekend, but some are warning that perhaps this is a distraction for something even bigger that could emerge.
Here are several headlines that will help get you up to date on what's going on:
Search Warrant Obtained
Sunday, the FBI obtained a warrant to search the emails it discovered on Weiner's laptop computer that may be related to its previous investigation of Clinton's private server. According to NBC News, FBI sources said Abedin used the same laptop to send thousands of emails to Clinton. The previous search warrant for the computer only applied to evidence of his communications with an underage girl in North Carolina, but now agents can compare the newly discovered emails with those that have already been investigated to determine whether any classified information was sent from Clinton's server.
It's Not Just 3 Emails
Initially, the Clinton campaign tried to imply the FBI only found three emails related to the original investigation and that there wasn't anything new to be learned. It also implied that Comey was making a politically motivated decision to announce this "new look" at the investigation—suggesting it wasn't actually reopened—but we now know it was "tens of thousands" of emails—or as The Wall Street Journal reports, it's 650,000 emails.
Did Huma Lie Under Oath?
Abedin's troubles may only be just beginning. She's already told the FBI she has no idea how those emails got onto her computer. But, as Judicial Watch would like to remind everyone, she told a court—in a sworn deposition—that she handed over all of her devices used to communicate with Clinton to the FBI. Clearly that is not the case, and if the bureau determines any of those emails originated from the laptop they now are searching, she could find herself guilty of perjury.
More Lies From Clinton World
In her first press conference to address the FBI letter to Congress, Clinton told reporters that only Republicans on Capitol Hill were informed of the new development in the bureau's investigation. Her campaign chairman repeated that lie twice more on Friday—even though they knew that wasn't true (Charisma Caucus reported that fact in its first article Friday afternoon). That led to this testy exchange between campaign manager Robby Mook and FOX News Channel's Chris Wallace on Sunday.
Columnist: Clinton Should Step Aside
John Kass, a columnist with The Chicago Tribune—a newspaper that is perhaps one of President Obama and the Democratic Party's biggest cheerleaders—wrote Saturday evening that Clinton should step aside for the sake of her party in the Nov. 8 general election. The Democratic Party should demand it, he added.

3 Reasons Why you should read Life in the Spirit. 1) Get to know the Holy Spirit. 2) Learn to enter God's presence 3) Hear God's voice clearly! Go deeper!
Has God called you to be a leader? Ministry Today magazine is the source that Christian leaders who want to serve with passion and purpose turn to. Subscribe now and receive a free leadership book.
Posted by Love For His People ministry at 9:35 AM No comments: Links to this post