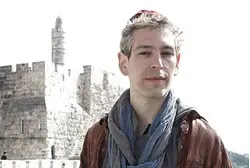 All proceeds from the song will go to the Jewish Federations of North America and The Robin Hood to help victims of Hurricane Sandy until the end of Chanukah on December 16.

"I am from New York and wanted to give back to my incredible community in the wake Sandy,” Matisyahu said, according to the Cleveland Jewish News.

The Grammy nominated recording artist will kick off his sixth annual “Festival of Light” Chanukah tour on December 8. He is currently in the middle of his fall college tour, which has taken him to college campuses around the country.

The “Happy Hanukkah” song can be downloaded via iTunes, Amazon and MatisyahuWorld.

Posted by Love For His People ministry at 8:45 AM No comments: Links to this post