Archaeologists have discovered a rare cache of artifacts, testimony of a ritual cult before the Jewish kingdom abolished them.
By Tzvi Ben Gedalyahu
First Publish: 12/26/2012, Israel National News 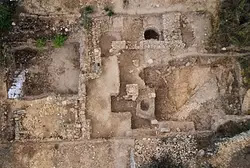 The discovery, like may others, was made during road excavation, this time at a new section of the Tel Aviv-Jerusalem Highway, known as Highway 1. The archaeological site is known as Tel Motza, at the Motza turnoff less than five miles west of Jerusalem.

A ritual building and a cache of sacred vessels date back approximately  2,750 years.


"The ritual building at Tel Motza is an unusual and striking find, in light of the fact that there are hardly any remains of ritual buildings of the period in Judae at the time of the First Temple," according to Anna Eirikh, Dr. Hamoudi Khalaily and Shua Kisilevitz, directors of the excavation on behalf of the Israel Antiquities Authority.

“The uniqueness of the structure is even more remarkable because of the vicinity of the site's proximity to the capital city of Jerusalem, which acted as the Kingdom's main sacred center at the time,” they added. According to the archaeologists, "Among other finds, the site has yielded pottery figurines of men, one of them bearded, whose significance is still unknown."


Tel Motza and the surrounding region are renowned for their prime archaeological importance. Many finds have previously been uncovered at the site, from a variety of different periods. From the 1990s to the beginning of the present millennium, the site was excavated in preparation for the new route taken by Highway 1.

At the time, the site's archaeologists proposed once more identifying the site with the Biblical settlement "Mozah" mentioned in the Book of Joshua – a town in the tribal lands of Benjamin bordering on Judaea (Joshua 18: 26). The proposal was based, among other things, on the discovery at the site of a public building, a large structure with storehouses, and a considerable number of silos.

Archaeologists identified the site as a storehouse, run by high-ranking officials, for Jerusalem's grain supplies.

The current excavations have revealed evidence that provides another aspect to our understanding of the site. "The current excavation has revealed part of a large structure, from the early days of the monarchic period (Iron Age IIA),” the archaeologists said. “The walls of the structure are massive, and it includes a wide, east-facing entrance, conforming to the tradition of temple construction in the ancient Near East: the rays of the sun rising in the east would have illuminated the object placed inside the temple first, symbolizing the divine presence within.

“A square structure which was probably an altar was exposed in the temple courtyard, and the cache of sacred vessels was found near the structure. The assemblage includes ritual pottery vessels, with fragments of chalices (bowls on a high base which were used in sacred rituals), decorated ritual pedestals, and a number of pottery figurines of two kinds: the first, small heads in human form (anthropomorphic) with a flat headdress and ; the second, figurines of animals (zoomorphic) – mainly of harnessed animals.”

The archeologists that "The find of the sacred structure together with the accompanying cache of sacred vessels, and especially the significant coastal influence evident in the anthropomorphic figurines, still require extensive research."


Ritual elements in the Kingdom of Judah are recorded in archaeological research, especially from the numerous finds of pottery figurines and other sacred objects found at many sites in Israel, and these are usually attributed to domestic rituals.

However, the remains of ritual platforms and temples used for ritual ceremonies have only been found at a few sites of this period.

According to the site's directors, "The finds recently discovered at Tel Motza provide rare archaeological evidence for the existence of temples and ritual enclosures in the Kingdom of Judah in general, and in the Jerusalem region in particular, prior to the religious reforms throughout the kingdom at the end of the monarchic period (at the time of Hezekiah and Isaiah), which abolished all ritual sites, concentrating ritual practices solely at the Temple in Jerusalem."

http://www.israelnationalnews.com/News/News.aspx/163586
Posted by Love For His People ministry at 8:49 AM