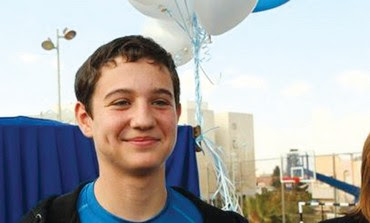 DANIEL KLOSK Photo: Ilan Halperin/UJA-Federation of New York
Kids from Beersheba’s tough Yud Alef neighborhood had their derelict basketball court at Rimonim Elementary School transformed into a brand new one this week thanks to 13-year-old Daniel Klosk from New York.

Klosk, who recently celebrated his bar mitzva, decided to donate the money gifted to him to build the new facility, through the UJAFederation of New York’s Give a Mitzvah-Do a Mitzvah program, which enables those celebrating bar and bat mitzvas to create their own project in accordance with their interests and hobbies.

The neighborhood is mainly home to immigrants from Ethiopia and the former Soviet Union.

Klosk is a major basketball lover, and today he plays for New Renaissance, a nationally ranked team of the Amateur Athletic Union in New York. Last August, he won the title of Most Valuable Player of the 6th-Grade Game at the J.E.M. All Star Classic.

“I have been very fortunate to have had the best coaches and the best facilities to play in and I wanted them to have the same things I had,” Klosk told The Jerusalem Post on Tuesday.

He and his family flew to Israel with a group of 40 people from New York and attended a ceremony on Sunday morning in Beersheba where they dedicated the new basketball court.

“The kids were all jittery,” Klosk said. “It was amazing to see that they were so enthusiastic.

We had a little assembly and as soon as I cut the ribbon and the balloons flew, all the kids started running to the court.”

After speeches, the ceremony ended with a friendly basketball game between the visiting kids from New York and local youngsters the same age.

“It was a great feeling to see them happy,” he added. “I made a permanent connection with them, despite our language barrier.”

Klosk’s older sister inspired him to donate his bar mitzva money as she had done so before him. Her donation went to a few places including a teen shelter just outside Tel Aviv.

During last spring break, he and his family flew to Israel to explore options for his donation.

“I am so proud of them for wanting to do this,” Klosk’s mother, Tricia Kallett, told the Post. “I think it is important for our family to give to others, they have seen this since they were little and I think it’s also given them great joy.

“Seeing the kids interact just showed me how we are all one big community, whether we are in New York or in Israel,” she added.

“It was a wonderful experience,” Klosk’s father, Craig, continued. “It was more than just the actual physical presence of the court, it was about building a permanent connection between us and them.”
http://www.jpost.com/JewishWorld/JewishFeatures/Article.aspx?id=298236
Posted by Love For His People ministry at 9:28 AM