US senators to Israel: We have your back

US senators to Israel: We have your back 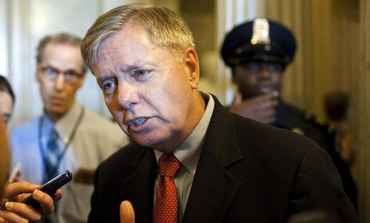 US Senator Lindsey Graham Photo: REUTERS/Joshua Roberts
A bipartisan group of United States senators are introducing a resolution to support Israel's right to defend itself when it comes to a nuclear-capable Iran, Republican Sen. Lindsey Graham said at a press conference Friday.

"No one wants another conflict in the world, militarily, but we also do not want a nuclear-capable Iran. It would create an arms race in the Middle East and would put Israel and our own nation in great peril," said Graham.

Graham acknowledged US President Barack Obama's initiative to put a stop to Iran's nuclear ambitions, and said "the people who want to destroy Israel very much have us in their cross-hairs too... since America has no better friend in the Middle East than Israel."

Ahead of Obama's visit to Israel this month, Graham labeled the initiative as an effort by republicans and democrats to tell Israel "we have your back."

Graham presented the resolution as a statement of support in the event that Israel acts in self defense against Iran. "This is not a green light for Israel to do anything other than defend itself. If the Israeli people have to act in self defense against existential threat of nuclear capable iran, we will be there," stated Graham.

"Every senator that votes for this resolution is telling the world, Iranians, Israelis, that in the event this day comes, we are going to be with the state of Israel, politically, economically, militarily to help them defend themselves against a threat that presents great danger not only to Israel but to the world, and to the US," he added.

Graham concluded his remarks with a message to the international community, saying "when it comes to the concept of standing with Israel in times of great peril, when we say we have your back we mean it, and when you [Obama] say it to Israel, you have our blessing."

Posted by Love For His People ministry at 9:16 AM