Children of the Holocaust: Stars without a Heaven 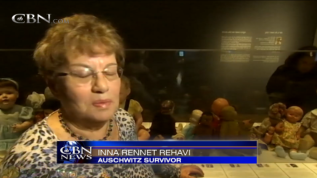 Children of the Holocaust:

Stars without a Heaven

JERUSALEM, Israel -- This is Holocaust Remembrance week, 70 years after the Allies opened the Nazi death camps and found the vortex of 6 million Jewish dead.
Today, fewer than 100,000 survivors remain, but Israelis are working hard to keep their memory alive.
It's difficult to grasp the horror and destruction of the Nazi killing machine. One-third of the world's Jews were murdered. The pain and scars endure to the next generation.
David Hershkoviz would hear his mother screaming in her sleep as she relived the agony: a German soldier separated her from her own mother, who died at Auschwitz.
"She didn't speak about the gas chambers because she wasn't there. She didn't speak about the fact that they were burning bodies; she wasn't there. But during the separation she was there, and that separation didn't leave her," he told CBN News, choking back tears.
Hershkoviz's mother died two years ago. But through a "second generation" study course in central Israel, he's keeping her story alive. The Shem Olam Holocaust Institute is educating people like Hershkoviz to tell their stories when the Holocaust survivors are gone.
The Institute's director, Avraham Kreiger, said many children didn't ask tough questions of their parents.
"How did their parents deal with guilt questions during those moments? How did they go through the difficult moments of separation, of leaving, of difficult decisions? They weren't able to ask this and apparently, the parents weren't able to answer," Kreiger told CBN News.
Meanwhile in Jerusalem, the Yad VaShem Holocaust Memorial Museum tells more stories in an exhibition called "Children in the Holocaust: Stars without a Heaven," with dolls and sketches.
Holocaust survivor Inna Rennet Rehavi's teddy bear is on display. She carried the bear during a remarkable escape with her mother from the train car leading them to Auschwitz.
"Teddy lasted better than I did, and many others. He is more war wounded than I am since he is missing an ear and an arm; but he was a real hero," Rehavi said.
Posted by Love For His People ministry at 6:49 AM No comments: 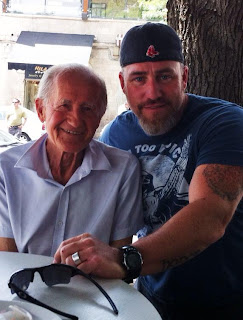 
In my opinion, life is about people. I would like to introduce you to Shmuel Carmeli. Born 1934 in Austria.

In 1944 with the Soviets pushing their offensive on the Nazis eastern front, Shmuel's mother, sisters and extended family were shipped to Aushwitz to be murdered. His father and brother took to the woods and met up with Jewish partisans running illegal "teen immigration" past the British naval blockade of the soon to be formed nation of Israel.

This 10 year old dodged Austrian Nazi death squads and fearing conscription into the advancing Soviet infantry Shmuel and his brother linked up with what would become Israel's Mossad and boarded a ship to Israel.

Upon arrival, he settled in Tel Aviv and was given an ID number and was placed in a kibbutz for the children from Europe to learn Hebrew and build a new life.

Shmuel witnessed the rebirth of Israel. In 1967, Shmuel was a member of the Jerusalem Brigade that fought the Jordanian army from the UN complex in Jordanian controlled east Jerusalem into the the Abu tor wadi ( now called the Forest of Peace) up the ridges of Mt Zion to recapture the Jewish Quarter of the Old City.

When not in uniform Shmuel spent his entire career working as a youth worker for the city of Jerusalem .

Shmuel told me that: "Every Jew has a Hagadah and an Agada. I have just shared a portion of his Agada.

(Hagadah is our Passover story
Agada is our personal story.)

Posted by Love For His People ministry at 8:38 AM No comments: