Christian pastor jailed in Iran for 3 years is freed 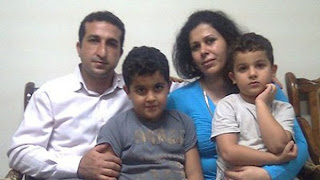 An undated photograph circulated by religious rights organizations shows Youcef Nadarkhani and his family.
Iranian Pastor Youcef Nadarkhani, who was originally sentenced to death in his native country for his Christian faith, was acquitted of apostasy charges and released from custody.

Nadarkhani, 32, was imprisoned for three years and waiting execution for refusing to renounce his Christian faith. His charges were lowered to evangelizing to Muslims, which carried a three-year sentence. He was released with time served, according to the American Center for Law and Justice, a Washington-based watchdog group that had been campaigning for the pastor's release.

"Today our sources in Iran reported that Pastor Youcef was acquitted of apostasy and released from prison. After languishing in prison for almost three years, he has been reunited with his family," Jordan Sekulow, executive director of ACLJ said in a statement to FoxNews.com.

"While we are working on confirming the exact details of his release, some sources report that the court alternatively convicted Pastor Youcef of evangelizing to Muslims, sentencing him to three years and granting him time served. Pastor Youcef’s story is an example of how the world can join together to ensure that justice is served and freedom preserved."

Nadarkhani was originally called to Saturday's hearing to answer to "charges brought against him," leading to speculation that the new charges from the Iranian Supreme Court could be for a security-based crime, a charge often handed down to cover-up prisoners being held and sentenced on faith-based charges.

"While we praise the release of Pastor Youcef, we must recognize that Iran felt obligated to save face among its people and continue its pattern of suppressing religious freedom with intimidation tactics," Tiffany Barrans, a legal director for ACLJ said to FoxNews.com.

"International attention to this matter saved this man's life, but we must not forget the human right of freedom of religion includes the right to freedom of expression."

Nadarkhani's attorney, who also has been jailed, maintained that the married father of two faced execution because he refused to renounce his religion. An Iranian diplomat told a United Nations panel earlier this year that Nadarkhani would not be executed.

According to Sharia law, an apostate has three days to recant. The pastor refused to do so and sources close to the matter say executions in Iran can happen at any time, often without notice. The court is reportedly seeking the opinion of Ayatollah Ali Khamenei, the Islamic republic's spiritual leader and highest authority, according to AFP.

The ACLJ worked with the State Department to try to win Nadarkhani's freedom, and the U.S. House of Representatives passed a resolution earlier this year condemning his imprisonment and calling for his immediate release. Nearly 3 million people have voiced support for Nadarkhani on Twitter through the "Tweet for Youcef" campaign.

Posted by Love For His People ministry at 9:48 AM No comments: Links to this post

By Perry Chiaramonte
| FoxNews.com
Congress unanimously approved a new resolution condemning the Iranian government for sentencing to death a Christian pastor accused of renouncing Islam. Youcef Nadarkhani's sentence has been affirmed at the highest levels of Iran's legal system and could be carried out at anytime, according to his supporters. The sentence shows that Tehran has again "failed to uphold its obligations to the Universal Declaration of Human Rights and the International Covenant on Civil and Political Rights," reads House Resolution 556.
The resolution, drafted by Pennsylvania Republican Joseph Pitts, calls for Iran to immediately exonerate and unconditionally release Nadarkhani as well as any other people who are being held or charged for religious or political beliefs.
"In Iran today, Pastor Youcef Nadharkani is in a high security prison wondering whether he will be executed for his faith," Pitts told FoxNews.com. "The government of Iran should abide by the agreements they have signed at the United Nations, which call for religious freedom. The House is asking the highest authorities in Iran to let Pastor Youcef return to his family and worship in peace."
Jordan Sekulow, executive director of the American Center for Law and Justice, said the lawmakers' stand sends a powerful message. "The truly bipartisan support in the House to stand up for Pastor Youcef and demand his release is extraordinary," Sekulow said in a released statement. "Iran is violating international law with its detention and promised execution of Pastor Youcef. We're grateful that so many members of Congress -- from different political and religious backgrounds -- understand the importance of standing up for religious freedom, for human rights."
Nadarkhani, who also held house church services in Iran, was facing execution after being convicted of apostasy in November 2010, but appealed his conviction all the way up to the Iranian Supreme Court.  He refused to renounce his Christianity and was sentenced to death.
Amid widespread condemnation, the Iranian court introduced new charges of rape and extortion, charges Nadarkhani's supporters say are false and trumped up merely to justify his execution.
Nadarkhani has been detained for nearly two and a half years.

Read more: http://www.foxnews.com/world/2012/03/01/congress-approves-resolution-condemning-iran-for-sentencing-christian-pastor-to/#ixzz1nzVN3e9z
Posted by Love For His People ministry at 2:58 PM No comments: Links to this post

Lawmakers in Washington are set to vote soon on a resolution to condemn Iran for violating the religious rights of Pastor Youcef Nadarkhani. The 34-year-old Iranian Christian leader has been imprisoned since 2009 on charges of apostasy, and now faces death by hanging because he refuses to recant his faith.

The U.S. House of Representatives will discuss a bipartisan resolution, Wednesday, to draw attention to Nadarkhani's case and pressure Iran to release him. A full vote is expected by Thursday. The measure was introduced by GOP Rep. Joe Pitts, an evangelical Christian, and Democratic Rep. Keith Ellison, a Muslim. So far, 61 members of Congress have signed the resolution.
**Call your representative in Congress.  You can also call the House's switchboard at (202) 224-3121.
The American Center for Law and Justice has also started an urging lawmakers to act on Nadarkhani's behalf. More than 170,000 people have signed.
"In just one week, your voice moved Congress to action," ACLJ Chief Counsel Jay Sekulow said.
The ACLJ has also started a Twitter campaign to spread the word about Nadarkani's case. @CBNNews has joined the effort.


The increased media coverage of Nadarkhani's plight is starting to put Iran on edge. Now, the Islamic regime is releasing conflicting reports on why the pastor is still being held. One report by Iran's Press TV even claims an execution order was never issued against Nadarkhani.
"Iran's Supreme Court has not yet handed down its final verdict ... in order to allow authorities to further investigate the file and reach the best decision," the Feb. 24 report read. Jordan Sekulow, ACLJ's executive director, said this is Iran's usual way of "backtracking."
The ACLJ warned Feb. 21 that the execution order had in fact been signed and Nadarkhani could be killed any day. As of Tuesday, the group could confirm that Nadarkhani is still alive.
Nadarkhani was arrested in 2009 while protesting Islamic lessons being taught at his sons' school. At the time, he was leading one of Iran's most popular house churches. Since being imprisoned, authorities have pressured Nadarkhani to say he's a Muslim or face death. Each time, the pastor has refused to deny his Christian faith.
Posted by Love For His People ministry at 12:05 PM No comments: Links to this post