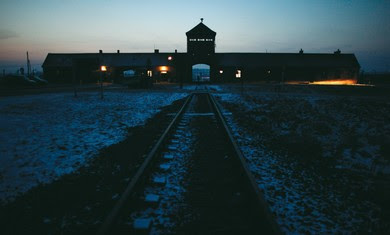 Train to Auschwitz Photo: REUTERS
KRAKOW – A court in Hungary ordered a Holocaust denier to serve a most unconventional punishment. He was instructed to visit either the Budapest Holocaust memorial center, the Auschwitz-Birkenau death camp or the Yad Vashem memorial in Israel.

Gyorgy Nagy, a 42-year-old unemployed computer technician, is the first Hungarian convicted under the country’s Holocaust denial law, which came into effect in February 2010. The court also gave him an 18- month suspended jail sentence.

If Nagy chooses to visit the local Holocaust memorial center, he will have to visit the place three times, and write down his thoughts and observations after his visits in order to complete his sentence.

Nagy was arrested at a political rally in Budapest in 2011 when the local police read on the banner he was holding: “The Shoah didn’t happen.”

Holocaust denial is a crime in Hungary punishable by a maximum three-year sentence.

The law criminalizing it was submitted by Attila Mesterhazy, chairman of the Hungarian Socialist Party. The law passed two years ago 197-1 with 142 abstentions.

Earlier attempts to ban Holocaust denial were rejected by the Hungarian courts for infringing on freedom of speech.

Despite the new law, Hungarian Prime Minister Viktor Orban has been sharply criticized recently by many world Jewish organizations for pandering to nationalists and tolerating anti-Semitism. In one of the most notable cases, Orban’s government was accused of approving the naming of a park in Gyomro, a small town on the outskirts of Budapest, after Miklos Horthy, the country’s wartime leader and a close ally of Adolf Hitler.

Orban was also accused for not condemning the anti-Semitic statements made in recent months by some members of the far-right Jobbik party, including a call to count the number of the Jews living in the country “and who represent a hazard for national security” and the demand for the resignation of Hungarians MP’s with both Hungarian and Israeli citizenship.

Posted by Love For His People ministry at 9:57 AM