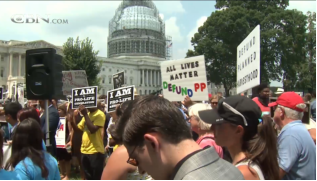 Thousands of women gathered in rallies across the nation Tuesday to demand an end to federal funding for Planned Parenthood amid more shocking revelations from undercover videos.

"There are people across this country who want to know exactly what is going on and if anything illegal is going on," Cathie Humbarger, executive director of Allen County Right to Life, said at a rally in Indiana.

The latest exposé by the Center for Medical Progress features a woman who previously worked for a company called StemExpress. She explains how she was required to dissect aborted babies so the business could obtain fetal tissue and organs for Planned Parenthood.

The videos inspired dozens of #WomenBetrayed rallies in the latest sign of growing outrage over Planned Parenthood's harvesting of baby organs for profit.

"Horrified at the things that I heard about fellow OB-GYNs talking so callously about ripping babies apart but doing it in a way to preserve organs that could potentially bring money in," Christina Francis, a medical doctor with the American Association of Pro-Life OBGYNS, said.

Meanwhile, Republican presidential hopefuls joined in one of the main #WomenBetrayed rallies, outside the U.S. Capitol in Washington.

"There comes a time in the history of nation when we will all be judged on whether or not we took a stand for life. Now is that time," Sen. Rand Paul, R-Ky., said.

"This callous disregard expressed over wine and cheese should inflame and infuriate us all and we should once and for all stop any penny of money going to Planned Parenthood," he continued.

Retired neurosurgeon Ben Carson also spoke, urging people of faith to stand up against what he calls the "blatant evil" of Planned Parenthood.

Carson told the pro-life crowd he had spent many nights as a surgeon "toiling so hard to save one of those lives."

The Senate will now vote on defunding Planned Parenthood before senators head home for their August recess.

Posted by Love For His People ministry at 1:44 PM