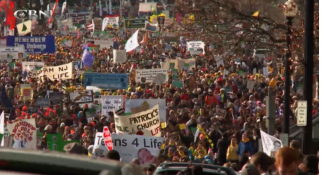 The undercover video scandal exposing the sale of baby body parts caused pro-life groups across the nation to take the streets last weekend to protest Planned Parenthood. But did the protests make a difference?

National Director of Priests for Life Father Frank Pavone believes they did. He took time to thank and encourage the tens of thousands of people in hundreds of cities across America who took a stand against the abortion giant in a national day of protest.

"I just wanted to take a moment to thank each and every one of you who took part in this nationwide series of protests," he told participants.

"There's a voice of protest inside of us against the atrocities of abortion and Planned Parenthood. And I want to thank you for having let that voice inside of you come outside to the public," he said.

Pro-life groups hope the latest undercover videos released by the Center for Medical Progress exposing the harvesting of baby body parts and the recent nationwide protests will influence Congress when lawmakers return in September.

The protesters, along with many others across the country, want to see Planned Parenthood investigated. Their immediate request, however, is for Congress to stop sending the organization half a billion dollars a year in taxpayer money.

Pavone believes the protests were a success.

"You're an encouragement to the entire pro-life movement, all those who are following these, these news stories but could not go out themselves," he said. "They have heard and will continue to hear of the great results, and you were part of that. You encouraged the movement."

It seems clear that movement is not backing down.

Posted by Love For His People ministry at 9:29 AM