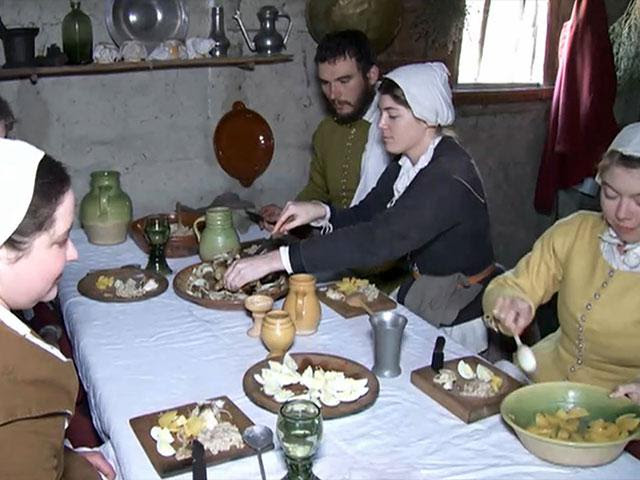 PLYMOUTH, Mass. -- Americans think they know a lot about the first Thanksgiving, with many envisioning it as happy Pilgrims wearing big buckles and feasting on huge, fat turkeys. But the facts are actually more fascinating than the fiction.
Take Plymouth Rock, for instance. Most accept that the big boulder marked "1620" and sitting just feet away from the water is where the Pilgrims first landed in the area. But the Pilgrims themselves never mentioned stepping off their boat onto a rock.
And the person who swore there was a rock and pointed it out to fellow Plymouth residents didn't bring it up until he was in his 90s, claiming some of the original Pilgrims told him about it.
Thankful Despite Tragedy
As for verifiable facts, one for sure is that these religious reformers started building their first American settlement in the harsh winter of 1620-1621, even as half their number died around them.
But just a few months later these faithful Christians who believed in thanking God for everything were already planning the first American Thanksgiving.
"This was in 1621 after the first season here in Plymouth where they lost half their population and only had 51 of 102 people left at the end of that season," Pilgrim role-player Leo Martin told CBN News.
Martin and his wife Nancy not only run the faith-based Jenney Museum in Plymouth, but dress up as Pilgrims and give tours and lectures. Martin has also authored the book Pilgrim Pursuit of Happiness.
Martin said the survivors' first crop did well and they knew they wouldn't die of starvation.
"They developed enough food to make it through the next winter, and they thought that they ought to thank God for that," Martin explained.
At the Plimoth Plantation where that first Pilgrim settlement is faithfully recreated, top researcher Richard Pickering dresses up to act out the part of Edward Winslow, one of only two Pilgrims to leave a written record of that first Thanksgiving.
Impersonating Winslow, Pickering told CBN News about preparations for the event.
"The very first feast that we had in these parts, our governor sent four men on fowling and in just some small hours, them four men were able to take enough wild fowl to feed our company for a week," he said. "For we required a special manner of rejoicing, the Lord having sustained us for a year and having brought in such a goodly harvest."
'They Are a Toothsome Bird'
In Plymouth's annual Thanksgiving parade, the occasional float will go by showing large, plump turkeys, the kind today's Americans imagine Pilgrims feasted on. But in truth, their turkeys were wild, lean and mean.
"They were very skinny and they could run up to 25 miles an hour," Martin said. "So to catch one was a challenge."
'Winslow' said, "I find the turkeys here of New England, they are a bit different than those that live upon the dung hills back home in England. But they are a toothsome bird."
Another sure fact: these grateful Englishmen didn't dine alone because they knew they wouldn't have made it without the Indians, or Sechems, as Winslow called them.
The Native Americans showed them what could grow in this radically different soil that was unkind to English seeds.
Those Pilgrims Could Party
"They felt that Massasoit, the chief of the Wampanog Indians, was so instrumental in their survival that they should invite Massasoit and his immediate family to that celebration, and they did," Martin explained.
But Massasoit misunderstood a bit.
"While we were feasting and making of sport and exercising our arms, amongst us come the great Sechem Massasoit and about 90 of his men," Winslow said.
Martin pointed out that could have wiped out all the Pilgrims' supplies, but the chief and his braves brought plenty of food with them.
"Venison, turkey, fish, vegetables -- and together they had enough food for a three-day celebration where they honored one another and became better friends," Martin said.
Norah Messier is Plimoth Plantation's expert on food of that era.
"Most likely there was fish on the Thanksgiving table as we now refer to it, possibly lobsters. We know when the natives arrived they brought with them venison, something not many of us put on our Thanksgiving table today," she stated.

'Pompion Stew' Instead of Pumpkin Pie
We'd put pumpkin pie on our tables. Messier did a cooking display for CBN News showing what the Pilgrims would have done instead.
"One of the things that most people would say you can't have Thanksgiving without: your pumpkin pie," Messier said.
"What I'm going to be doing here is exactly what we know they did frequently in New England," she explained. "The ancient standing dish is called 'stewed pompion.'  Pompion is the period term for the pumpkin."
***For stewed pompion and other recipes click here.
She demonstrated how the Pilgrims would dice this pompion/pumpkin and stew it into sort of a mush.
"Eventually you're going to add just a splash of vinegar and a little bit of ginger," Messier said. "And supposedly it's going to taste like stewed apples, something that was definitely not on the first Thanksgiving table: no apples in New England, not yet."
They were huge on stuffing, and the batch Messier put together for CBN News came from a recipe dated 1597. It called for bread crumbs, cranberries, chopped yolk of hard-roasted eggs, butter and raisins.
Just because of the raisins alone, this stuffing would have taken much more labor.
"Raisins up until recently had seeds in them still," Messier stated. "Imagine picking out all of those seeds."
Bringing Old England to New England
Finally, the cook would have seasoned this stuffing with herbs brought all the way from England, like thyme, hyssop, and parsley.
"We believe that the things they are growing in their kitchen gardens in the 17th century are primarily things brought over from England. They're trying to bring home with them," Messier explained. "They're trying to make New England feel like old England."
That likely is why a man like Winslow would have preferred something better than those skinny, exotic New England turkeys.
Winslow said with a twinkle in his eye, "In truth, my greatest delight is a goose for I do love its great fatness."
Posted by Love For His People ministry at 7:41 AM