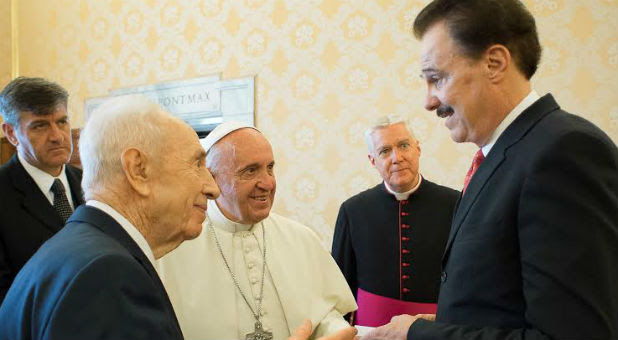 Why Pope Francis Met With This Former Israeli President, Friends of Zion Founder


Join us on our podcast each weekday for an interesting story, well told, from Charisma News. Listen at charismapodcastnetwork.com.
His Holiness Pope Francis, Israel's ninth President Shimon Peres, Chairman of the International Board of the Friends of Zion (FOZ) museum in Jerusalem and Dr. Mike Evans the Museum's Founder made a joint statement promoting peace and calling for an end to acts of violence in the name of religion. Peres also, presented his Holiness Pope Francis with a unique piece of art from the Friends of Zion Founders gallery. The piece depicts a dreamlike biblical scene of Abraham answering to the high calling on a backset with the Hebrew word Hinneni meaning "Here am I."
Peres and Evans also shared the story of Irena Sendler, one of the heroes depicted in the museum. Sendler, a young Catholic nurse, smuggled approximately 2,500 Jewish children out of the Warsaw Ghetto and then provided them with false identity documents and shelter outside the Ghetto. In 1965, Sendler was recognized by the State of Israel as one of the Righteous Among the Nations. Dr. Mike Evens, founder of the FOZ museum, spoke of the importance of friendships between all people and nations, which is even more important today with raising anti-Semitism worldwide.
The FOZ museum is one of the newest attractions in the very heart of Jerusalem inviting visitors from all over the world to experience the courageous stories of those who stood by in support of the Jewish people and the state of Israel in the last 200 years. Magnificently told, the museum uses groundbreaking technology, allowing visitors to experience the unfolding story as though stepping back in time. From 3D presentation and giant touch screens to projection mapping on unique sculptures and complex roto scope animations that transform live-action video footage into a painted media.
The heroes presented in the museum include U.S. President Harry Truman, British Prime Minister Winston Churchill, Prof. George W. Bush, Orde Wingate and Righteous Among the Nations such as Oskar Schindler, Raoul Wallenberg, Irena Sendler and the Ten Boom family, who risked their lives to save Jews persecuted throughout the world.
The Friends of Zion Museum opened in Jerusalem last September and has set itself a goal of serving as a bridge, connecting people from around the world and motivating more communities to come out in support of Israel.

Draw closer to God. Experience the presence of the Holy Spirit every month as you read Charisma magazine. Sign up now to get Charisma for as low as $1 per issue.
Has God called you to be a leader? Ministry Today magazine is the source that Christian leaders who want to serve with passion and purpose turn to. Subscribe now and receive a free leadership book.
Posted by Love For His People ministry at 6:49 AM