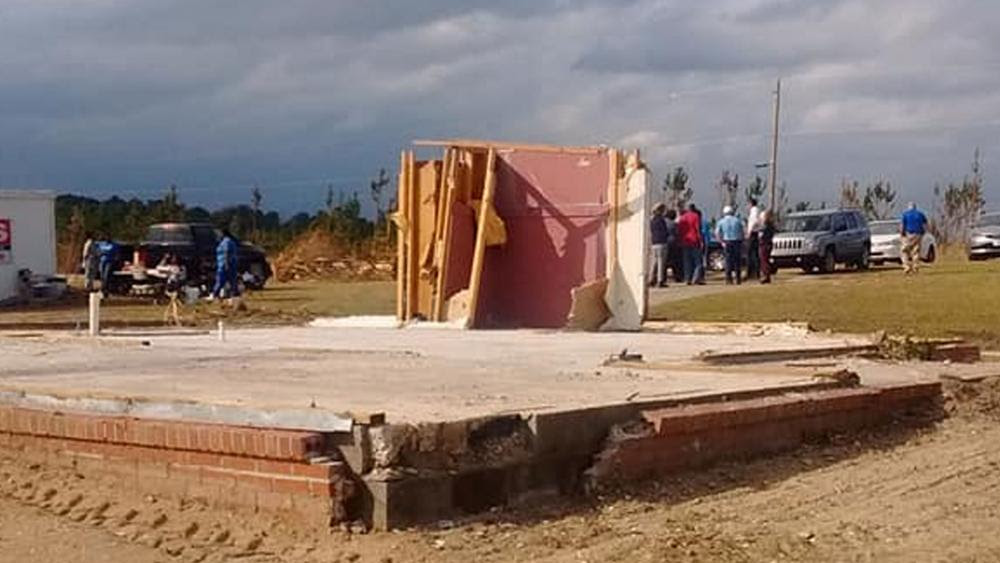 Prayer closet the only thing left standing after Alabama tornado (Photo credit: Jason N Christa Smith/Facebook)
'God Is Awesome!' Tornado Destroys House, but Prayer Closet Still Standing
03-26-2019
CBN News Ericah Jones
The deadly, monster EF-4 tornado that recently tore through Lee County, Alabama, devoured nearly everything in its path. But one Christian family miraculously survived – huddled inside a prayer closet that was literally the only thing left standing from their house.
That massive twister killed 23 people, including four children. But amazing testimonies are still emerging in the aftermath.
Catastrophic events like this can be devastating and hard to come to grips with, but one eyewitness says this proves God's power to protect.
Jason Smith serves as a chaplain with the Billy Graham Rapid Response Team, and he went to the tornado zone to minister to survivors. But what he spotted there ministered to him – a piece of slab left from a home that had been demolished by the storm, according to 11 Alive.
Smith was surprised by what he found there, so he went public with the story to offer some inspiration. And the images he shared from that house have gone viral.
"Listen to me please. I just left a family who survived the tornado in this house and the only left standing is this closet," Smith wrote in the viral Facebook post.
Sitting upright on the thick, flat piece of concrete were the frames to what appeared to be a closet.
"It's the grandmother's prayer closet, and the whole family survived."
Smith, while in total shock, also knew that there could only be one reason behind the family surviving a deadly tornado that day.
"My God is awesome!!! Shout somebody!" he said.
This isn't the only astounding story to emerge from that tornado. As CBN News has reported, 40 kids were miraculously shielded as they sang "Jesus Loves Me", even though the tornado ripped off the roof from the church where they were sheltering.
Share
Tweet
Email
+0
Posted by Love For His People ministry at 5:47 AM