Posted by Love For His People ministry at 6:36 AM No comments: Links to this post

'Who Shall Stand in This Holy Place?' - SUSAN MICHAEL/ICEJ CHARISMA NEWS 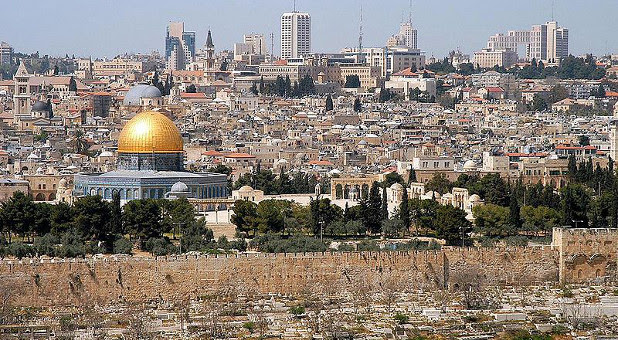 'Who Shall Stand in This Holy Place?'

The city of Jerusalem is the highlight of any pilgrimage to the Holy Land. It is not just a city that has some 4,000 years of history, making it one of the oldest cities on earth, but it is mentioned 806 times in the Bible with names as beautiful as "City of God," "Joyful City" and "Desired One."
Jerusalem in Hebrew is Yerushalayim and is often translated as "City of Peace."
It is situated on the southern Judean plateau which at its highest point is 2,500 feet above sea level. Only 37 miles west of Jerusalem is the Mediterranean Sea, and 22 miles to its east is the lowest point on earth, the Dead Sea. This explains why in John 5:1 Jesus "went up to Jerusalem," and in the parable of the Good Samaritan, the poor man that fell among thieves was going "down from Jerusalem" (Luke 10:30).
This idea of ascending to Jerusalem does not merely refer to geography though; Jerusalem was the site of the temple of God, therefore a place of spiritual ascent. "Who shall ascend into the hill of the Lord?" asks the psalmist, "or who shall stand in his holy place?" (Ps. 24:3).
Psalms of Ascent
In fact, 15 of the biblical Psalms (120-134) bear the label "song of ascent." They've also been called "songs of steps" and "pilgrim songs." Many scholars believe that these psalms were sung by worshippers walking up the road to Jerusalem at the time of the three great pilgrimage festivals: Passover, Tabernacles and Pentecost. The notion of "ascending" to Jerusalem persists today. For example, Jews who immigrate to Israel are said to be making "aliyah," or "ascent."
Many Christian tours recite the Psalms of Ascent as their buses climb the road to Jerusalem. What a fitting way to prepare one's heart for the special experience of visiting the city that God chose for Himself (Ps. 132:13-14). The Psalms of Ascent end with verse 3 of Psalm 134, which is the pilgrim's prayer that they would be blessed by God while in Zion.
Jerusalem in the Bible
Jerusalem is mentioned in the Bible as early as Genesis 14:18, where it is referred to as Shalem, the city ruled by Melchizedek. Later it is called Jebus, which was captured from the Jebusites by King David and made the capital of Israel. David also bought a certain threshing floor there from its owner and kept it as the site of the future temple. That site is also referred to as Mt. Moriah in 2 Chronicles 3:1, which indicates that King Solomon built the temple on the same mountain where Abraham had earlier bound Isaac.
Zion was another name given to the hill where the Jebusite fortress stood, and was later applied to the Temple Mount, or Mt. Moriah, just to the north of the fortress. Zion has also come to be used as a synonym for the city of Jerusalem as a whole.
Sites to See
In biblical times, Jerusalem covered territory similar to what is known today as the Old City, a 35 square-mile walled area divided into four sections carried over from Ottoman rule: The Jewish, Christian, Muslim and Armenian quarters. The Old City has been surrounded by walls for its defense since ancient times, but the walls that are visible today date back to the 16th century. The Old City was the entire city of Jerusalem until the mid-19th century when building began outside of the city walls.
While an exhaustive list of important sites in Jerusalem is not possible for this article, everyone must see the Western Wall, the only remnant of the Temple walls; the Temple Mount on which is built the Muslim Dome of the Rock; the Church of the Holy Sepulchre, built over the likely site where Jesus was crucified and buried; the Garden Tomb, a rock-cut tomb in a skull-shaped hill considered an alternative site of Jesus' crucifixion and burial; and the Mt. of Olives.
The Capital of Israel
As you can imagine, Jerusalem today is a very diverse and fascinating modern city inhabited by over 800,000 people. It is a sprawling city with beautiful vistas from hill-top housing developments. In addition to being Israel's spiritual, political and administrative capital, Jerusalem is also a leader in education and health care, and its religious, historical and cultural attractions make it the country's premier tourist destination.
It was some 3,000 years ago that King David captured Jerusalem and made it the capital of Israel. Since then, the city has been destroyed, besieged, attacked and rebuilt many times. But it always remained in the hearts of the Jewish people who longed to one day return and re-establish sovereignty there.
The Zionist movement, while a modern political movement, is in many ways a continuation of this ancient attachment of the Jewish people to Jerusalem. The current refusal of the nations to recognize Jerusalem as the capital of Israel is an attempt to rob the Jewish people of their spiritual and scriptural heart.
This is why the International Christian Embassy Jerusalem recognizes Jerusalem as the eternal and undivided capital of the State of Israel.

Note: This is the second in a series of articles introducing Israel and various biblical sites of interest to the Christian reader. Click here for the first, "8 Reasons Why Every Christian Should Visit Israel."
Susan Michael is the U.S. Director of the International Christian Embassy Jerusalem and leads tours to Israel icejusa.org/tours.
For a limited time, we are extending our celebration of the 40th anniversary of Charisma. As a special offer, you can get 40 issues of Charisma magazine for only $40!
NEW from CHARISMA: Do you want to encounter the Holy Spirit and hear God speak to you? Increase your faith, discover freedom, and draw near to God! Click Here
Did you enjoy this blog? Click here to receive it by email.
Posted by Love For His People ministry at 6:38 AM No comments: Links to this post