6/4/2018 LAWRENCE HURLEY/REUTERS AND CHARISMA NEWS
The U.S. Supreme Court on Monday handed a narrow victory to a Christian baker from Colorado who refused for religious reasons to make a wedding cake for a gay couple.
The justices, in a 7-2 decision, faulted the Colorado Civil Rights Commission's handling of the claims brought against Jack Phillips, saying it had showed a hostility to religion. In doing so, the commission violated his religious rights under the First Amendment of the U.S. Constitution.
But the court did not issue a definitive ruling on the circumstances under which people can seek exemptions from anti-discrimination laws based on their religious views.
The commission had said Phillips violated the Colorado anti-discrimination law that bars businesses from refusing service based on race, sex, marital status or sexual orientation by rebuffing gay couple David Mullins and Charlie Craig in 2012.
Two of the court's four liberals, Stephen Breyer and Elena Kagan, joined the five conservative justices in the ruling authored by Justice Anthony Kennedy.
"The commission's hostility was inconsistent with the First Amendment's guarantee that our laws be applied in a manner that is neutral toward religion," Kennedy wrote, referring to the First Amendment of the U.S. Constitution.
"The outcome of cases like this in other circumstances must await further elaboration in the courts, all in the context of recognizing that these disputes must be resolved with tolerance, without undue disrespect to sincere religious beliefs, and without subjecting gay persons to indignities when they seek goods and services in an open market," Kennedy said.

Of the 50 states, 21, including Colorado, have anti-discrimination laws protecting gay people.
The closely watched case before the Supreme Court, which in 2015 legalized same-sex marriage nationwide, pitted gay rights against religious liberty. President Donald Trump's administration intervened in the case in support of Phillips. Christian leaders applauded the decision.

"Today, the Supreme Court ruled 7-2 in favor of Jack Phillips and more importantly, the First Amendment," said Tim Wildmon, president of the American Family Association. "The high court specifically rebuked the Colorado Commission for its demonstrable venomous hostility toward Mr. Phillips' Christian beliefs in handing down their decision. This is an important day for all who value liberty in general and religious liberty in particular."

Dr. Jerry A. Johnson, president and CEO of the National Religious Broadcasters, lauded Phillips for his courage to fight the case.

"The Supreme Court was absolutely correct to overturn the clear religious discrimination perpetrated by the state of Colorado against Jack Phillips," said Dr. Jerry A. Johnson, president and CEO of NRB. "A 7-2 ruling is a strong affirmation of the central importance of religious liberty to our nation. This decision affirms Americans' freedom to believe, to speak and to live their faith. Politicians who are still intent on currying favor with the well-funded radical left should take a hard look at this case and correct their course of intolerance before they further trample on America's fundamental freedoms. I thank Jack for fighting on the front lines for us all. I also commend NRB member Alliance Defending Freedom for yet another victory before the highest court in our land."

Deborah, Esther and Anna carried a profound anointing. Become a Godly woman of boldness, power and strength. Get the Anointing Bundle.
The Holy Spirit wants to lead you into a deeper, more intimate experience with God. Everything changes in His presence. Enter His Presence.
Summer Reading Bundles + FREE GIFTS! These bundles include prophecy, health, prayer, and the supernatural. Grab your Favorite.

Posted by Love For His People ministry at 1:01 PM No comments:

Is It Sinful To Make A Cake For A Gay Wedding? - HELLO CHRISTIAN

Posted by Love For His People ministry at 3:22 PM No comments: 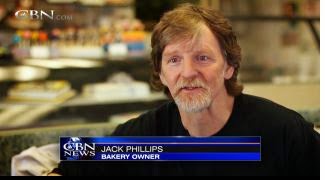 
LAKEWOOD, Colo. -- Imagine being ordered to go against your religious beliefs, and if you refuse, you could be arrested, fined, or sued.

That happened to the Christian owner of a Colorado bakery who now must make wedding cakes for gay couples.

However, the owner is standing his ground and his action is inspiring people around the world.

The sign on the door reads "Celebrating 20 Years of Great Cakes!" For two decades, Masterpiece Cakeshop has created art in the form of baked goods that keeps customers coming back.

From cookies and cupcakes to signature cakes, Jack Phillips and his daughter Lisa have transformed their bakery into a studio. Phillips said it's all inspired and motivated by his faith in Jesus Christ.

But Phillips' Christian faith landed him in trouble with the law. His crime: adhering to his biblical belief that marriage is between one man and one woman.

In 2012, a homosexual couple sued the baker after he declined to make a cake to celebrate their marriage. An administrative law judge ruled against him, and the Colorado Civil Rights Commission agreed.

The commission stated Phillips' refusal went against the state's public accommodation law. It requires businesses to serve customers regardless of their sexual orientation.

In a public statement, one member of the Civil Rights Commission said, "I can believe anything I want, but if I'm going to do business here, I'd ought to not discriminate against people."

"I didn't discriminate against anybody," Phillips countered. "Like Nicolle (his attorney) said, I've chosen not to make cakes for same-sex weddings. I told David and Charlie when they came in that I would sell them cookies and brownies and birthday cakes and shower cakes. I just don't do the same-sex wedding cake. So I did not discriminate against them, just that event I've chosen not to participate in."

His attorney Nicolle Martin said the Commission violated his First Amendment rights. She's taken the case to the Colorado Court of Appeals.

He must also re-educate his staff about Colorado's Anti-Discrimination Act. Under that law, artists must endorse all views.

The order also requires him to put in place new policies to comply with the Commission's order.

In addition, he will submit quarterly "compliance" reports to the government for two years.

According to Alliance Defending Freedom, the reports must include the number of customers declined a wedding cake or any other product. They must also include why it was declined "so to ensure he has fully eliminated his religious beliefs from his business."

"The government has chosen which message it favors in this case; I think the state has made it very clear," Martin said.

"Jack's First Amendment rights, Jack's freedom to express himself or more importantly, not express himself, must bow to the complainants' message," she said. "And all I can say is what that looks like to me is something very frightening, and that's nothing more than diversity through conformity, and that's not diversity at all," she added.

Phillips' case is one of a handful in which complainants sued private businesses for refusing to accommodate gay couples getting married.

It also helped lead to controversial proposals in several states allowing businesses to decline service based on the religious beliefs of owners.

"It's surprising," Phillips said. "This is not what they taught us in civics class... they could do this to you. They do this in other countries, not here."

In a country founded on freedom of religion and speech, that's a future important to all Americans.

Posted by Love For His People ministry at 8:05 AM No comments: