As American Christians pray for guidance as to who to vote for in the presidential elections in the United States - light bearer of an ever-shrinking Judeo-Christian world - I believe it of great importance that they read and consider the following two items:

The Freedom Center has just released a new video, Obama: The Anti Israel President. Glenn Beck, on GBTV, showed the entire video earlier this week. The word is getting out; over 32,000 have viewed it on Youtube in just 5 days. Please pass this on to friends and others on your list. 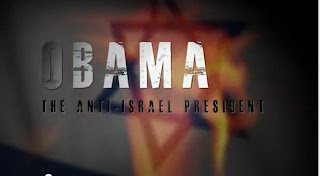 Thank you for all your help.


Daniel Pipes, a well-known Middle East and Islam expert, dances around the Barack Hussein Obama claim that he has never really been a Muslim.

You can read the Pipes article in the Washington Times HERE:

However, if you scroll down to the Comments section, you'll find a comment by Greg Neubeck that is a far superior rebuke of the Obama lie:

It was you who told an Islamic dinner - "I am one of you."

It was you who on ABC News referenced - "My Muslim faith."

It was you who gave $100 million in U.S. taxpayer funds to re-build foreign mosques.

It was you who wrote that in the event of a conflict -"I will stand with the Muslims."

It was you who assured the Egyptian Foreign Minister that - "I am a Muslim."

It was you who bowed in submission before the Saudi king.

It was you who sat for 20yrs in a Liberation Theology Church condemning Christianity and professing Marxism.

It was you who exempted Muslims from penalties under Obamacare that the rest of us have to pay.

It was you who purposefully omitted - "endowed by our Creator" - from your recitation of The Declaration Of Independence.

It was you who mocked the Bible and Jesus Christ's Sermon On The Mount while repeatedly referring to the HOLY Quran.

It was you who traveled the Islamic world denigrating the United States Of America.

It was you who instantly threw the support of your administration behind the building of the Ground Zero Victory mosque overlooking the hallowed crater of the World Trade Center.

It was you who refused to attend the National Prayer Breakfast, but hastened to host an Islamic prayer breakfast at the WH.

It was you who ordered both Georgetown Univ. and Notre Dame to shroud all vestiges of Jesus Christ BEFORE you would agree to go there to speak, but in contrast, you have NEVER requested that the mosques you have visited adjust their decor.

It was you who appointed anti-Christian fanatics to your Czar Corps.

It was you who appointed rabid Islamists to Homeland Security.

It was you who said that NASA's "foremost mission" was an outreach to Muslim communities.

It was you who as an Illinois Senator were the ONLY individual who would speak in favor of infanticide.

It was you who were the first President not to give a Christmas Greeting from the WH, and went so far as to hang photos of Chairman Mao on the WH tree.

It was you who curtailed the military tribunals of all Islamic terrorists.

It was you who refused to condemn the Ft. Hood killer as an Islamic terrorist.

It is you who has refused to speak-out concerning the horrific executions of women throughout the Muslim culture, but yet, have submitted Arizona to the UN for investigation of hypothetical human-rights abuses.

It was you who when queried in India refused to acknowledge the true extent of radical global Jihadists, and instead profusely praised Islam in a country that is 82% Hindu and the victim of numerous Islamic terrorists assaults.

It was you who funneled $900 Million in U.S. taxpayer dollars to Hamas.

It was you who ordered the USPS to honor the MUSLIM holiday with a new commemorative stamp.

It was you who directed our UK Embassy to conduct outreach to help "empower" the British Muslim community.

It was you who embraced the fanatical Muslim Brotherhood in your quest to overthrow the Egyptian President, Hosni Mubarak.

It was you who funded mandatory Arabic language and culture studies in Grammar schools across our country.

It is you who follows the Muslim custom of not wearing any form of jewelry during Ramadam.

It is you who NOW departs for Hawaii over the Christmas season so as to avoid past criticism for NOT participating in seasonal WH religious events.

It was you who was un-characteristically quick to join the chorus of the Muslim Brotherhood to depose Egypt's Hosni Mubarak, formerly America's strongest ally in North Africa; but, remain muted in your non-response to the Brotherhood led slaughter of Egyptian Christians.

Do we really need to go on?

Barack, you may be a lot of things; but, for certainty, you are no Christian.

Obama, who refers to himself as: "A man of Africa," is precisely the type of 'divided loyalties" individual that our Founders attempted to prohibit from ascendancy to the presidency when they constructed our Constitution.