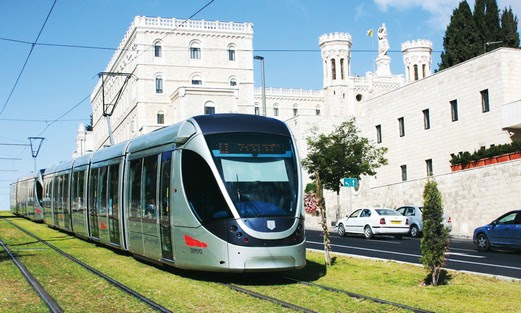 
Just ahead of Jerusalem’s busiest period for visitors from Yom Kippur through Succot, the municipality has released a new survey pointing to a large increase in the amount of foot traffic in the major downtown areas.

According to the report, since the light rail began running, there has been an overall increase of 41 percent in the number of pedestrians, from 298,000 visitors in July 2011, the month before the rail started service, to 422,000 visitors in August 2012.


The survey was carried out by video cameras at 17 different points in the downtown area that counted the number of pedestrians from 7:00 am to midnight.
The largest increase was Nahalat Shiva near Zion Square, which saw an increase of 87% in the number of visitors, from 55,000 in July 2011 to 106,000 in August 2012.

“There is no Jerusalemite that doesn’t get excited to see that the city center is again bustling and active after it has been fading for many years,” said Jerusalem Mayor Nir Barkat, in response to the survey.

Nadav Meroz, head of the Jerusalem Transportation Master Plan, highlighted the fact that the light rail is still relatively new and has not yet reached full capacity.

“There were those that were concerned that the train would hurt the number of visitors in the center of the city, but today we see that the phenomenon is reversed and this enormous investment is beginning to bear fruit,” he said.

Meroz added that in other European cities, especially in France and Germany, the introduction of the light rail led to a similar revival of the downtown area.

Downtown business owners agreed that the light rail had brought a dramatic increase in foot traffic.
“They don’t have to do a survey, you can see it with your eyes!” said Malekan Kumars, the owner of the Joy dress shop next to the Jaffa Central light rail stop. “Jaffa Road never looked this way, and in a good way,” he said.

Kumars added that the accessibility had certainly brought him more customers, including Arabs from east Jerusalem who now make up about 20% of his customer base, compared with practically no Arab customers before the rail. But the business owners aren’t the only ones benefiting from the increased traffic: since the train started, rent for stores along the road has increased about 20%, said Kumars, a senior member of the Jaffa Road Business Committee.

Avraham Levy, owner of a 35-year-old vegetable stall at the shuk who sits on the Mahaneh Yehuda Council, agreed that he also saw a much higher amount of foot traffic there. But he said that while the light rail has brought in more visitors, it made it harder for residents to do their daily shopping at the market.

“It’s tourism, they’re not coming to take bags of tomatoes and cucumbers,” he said. “So many people come and say ‘it’s beautiful,’ there are a lot of tourists, but economically for us it’s nothing.”
Levy reasoned that the coffee shops and gift shops that have sprung up in the market are better able to capture this demographic.

“For Jerusalem in general, [the light rail] is good, but the problem is how to bring it to the small businesses,” he said.

In order to accommodate the train, the main route to the shuk, Agrippas Street, was closed to private cars due to the increased number of buses - a move Levy said has severely impacted their customer base, since it has made parking near the shuk more difficult.

The light rail will be put to the test over the next few weeks, as more than 1 million visitors from Israel and abroad are expected to flood the Old City over Yom Kippur and Succot.

The Old City will be closed to private cars as it is the rest of the year. However, parts of Highway 1 and Hebron Road leading to the Old City will also be closed to private vehicles to deal with the increase in buses – though there will be extra shuttles from Teddy Stadium and Shmuel Hanavi Street. Additionally, the light rail will run at intervals of 5 to 8 minutes all day, not just during rush hour.

Posted by Love For His People ministry at 9:36 AM