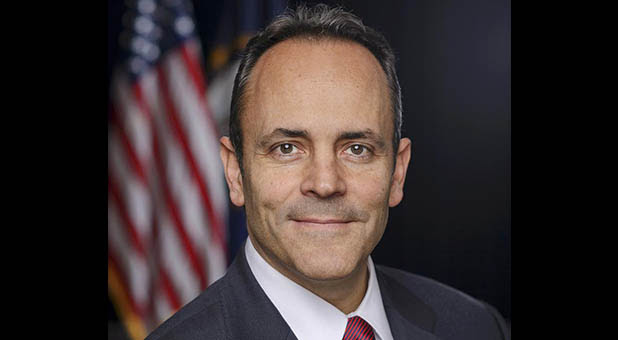 Gov. Matt Bevin's 'Year of the Bible' Pays Off in Kentucky

4/24/2017 BOB ESCHLIMAN  CHARISMA NEWS
Earlier this year, Kentucky Gov. Matt Bevin declared 2017 would be the "Year of the Bible," and it seems to be paying off in the state legislature.
Tuesday, the governor signed his second of two major pieces of legislation into law that directly impact the use of the Bible in public school classrooms and the religious liberty of students on public school grounds. Both are expected to have a profound impact on high school and college students.
The former, House Bill 128, directs the state board of education to formulate curricula for local school districts that wish to offer classes about the Bible. School districts are not required to offer the classes, and those that do may only offer the class as an elective.
The carefully crafted legislation makes it clear that such classes must comply with the First Amendment's "Establishment Clause," while also providing insight into students about the Bible's impact on American law, culture and society. The bill's author, state Rep. D.J. Johnson (R-Owensboro), explained the goal of the bill after it passed out of the House of Representatives:
"This bill will provide guidance at the state level for local school boards to offer elective Social Studies Courses on the Old Testament, New Testament or both. A couple of thoughts on the bill: First, this is not a mandate. Local boards already have the option of offering these courses. Second, then why introduce the bill? The purpose of the bill is to provide guidance, uniformity, and constitutional support for the local school boards that may be wanting to offer such courses, but are unsure of the way to proceed. A stronger understanding of the Bible will result in a stronger understanding of our society, culture, literature, and laws. Additionally, studies show that students that have a higher level of Bible literacy also tend to have higher GPAs."
The bill passed out of the Senate with all but four Democrats supporting it.
Last month, Bevin also signed into law Senate Bill 17, which reinforces the right of students to make religious and political expressions that are otherwise protected by the U.S. Constitution and are not disruptive to the educational process. The bill was drafted by state Sen. Albert Robinson (R-London) after a local school district censored parts of "A Charlie Brown Christmas" that contained scripture verses.
He said the bill would "specify that students in Kentucky's public schools, colleges and universities could express their religious and political opinions in their school work, artwork, speeches and clothing and be allowed to distribute political materials on school grounds and use school media to announce religious meetings." Predictably, LGBT activists have labeled the law as discriminatory.

Leaders are readers! Subscribe now and get 3 magazines for the price of 1. Get Ministry Today, Charisma and SpiritLed Woman all for $24. YES - Sign me up!
3 Reasons Why you should read Life in the Spirit. 1) Get to know the Holy Spirit. 2) Learn to enter God's presence 3) Hear God's voice clearly! Click Here to draw closer to God!
Posted by Love For His People ministry at 6:38 AM