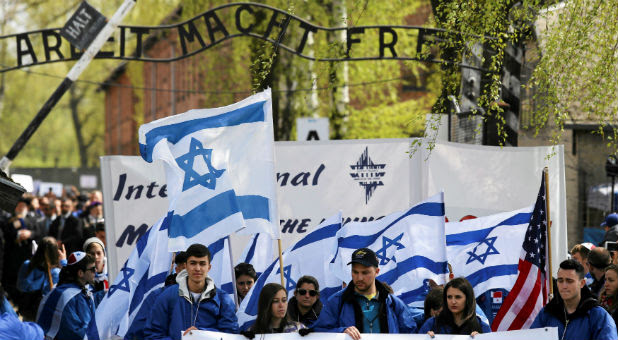 U.S. President Donald Trump said anti-Semitism should be defeated, and called the Holocaust the "darkest chapter of human history" in a video address on Sunday, following two missteps by his administration regarding statements about genocide during World War II.
"The mind cannot fathom the pain, the horror and the loss. Six million Jews, two-thirds of the Jews in Europe, murdered by the Nazi genocide. They were murdered by an evil that words cannot describe, and that the human heart cannot bear," Trump said in a speech to the World Jewish Congress Plenary Assembly in New York on Yom HaShoah, Israel's Holocaust Remembrance Day.
"On Yom HaShoah, we look back at the darkest chapter of human history," Trump added. "We mourn, we remember, we pray, and we pledge: 'Never again.'"
In January, on international Holocaust Remembrance Day, a Trump administration statement failed to mention Jews, the overwhelming majority of those who were killed in concentration camps under Nazi dictator Adolf Hitler.
Earlier this month, White House spokesman Sean Spicer triggered an uproar when he said Hitler did not sink to the level of Syrian President Bashar al-Assad by using chemical weapons.
Spicer later apologized after his comments aroused criticism on social media and elsewhere for overlooking the fact that millions of Jews were killed in Nazi gas chambers.
Trump's four-minute message included somber references to Jewish suffering in the Holocaust, a commitment to support Israel and a rebuke of prejudice and anti-Semitism.
"We must stamp out prejudice and anti-Semitism everywhere it is found. We must defeat terrorism, and we must not ignore the threats of a regime that talks openly of Israel's destruction," Trump said in an apparent reference to Iran.

© 2017 Thomson Reuters. All rights reserved.
Posted by Love For His People ministry at 11:56 AM