I received this post recently on my Facebook page from a friend and thought it would be good to share on "Love For His People" blog. 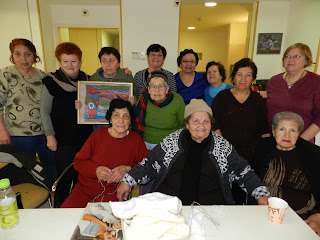 "I'm trying to find people to help stop the senior club next to my house from closing. I wrote this:

Don't turn out the lights!

Each day, 20-25 elderly people come to the Golden Age club on HaShayish St. in Jerusalem, Israel. At the Club they meet, talk, share, support one another, celebrate their birthdays and their grandchildren and even their great-grandchildren's birthdays together.

They celebrate the Jewish holidays, organize arts and crafts exhibitions and so much more … when they come to the Club loneliness retreats, and they are among friends.

The Club began operating in the early '90s. Each member has their story - they are alone or sick, disabled, a survivor of the Holocaust... some of them fought or lost children in Israel's wars.

But the Club is about to be closed because the Jerusalem Municipality is withdrawing its subsidies.

Cutbacks began in January 2010 when the Club hours were cut and it began opening only three days a week. In October 2011 the subsidized transportation system was halted (subsidized by AMIT – the Association of volunteers for aid for the elderly in Jerusalem) meaning some of the members could not physically get to the Club.

In our community today, an increasing number of elderly individuals can go for many weeks without seeing another person or are unable to even leave their homes.

Community support for the elderly is of the highest importance. Socially, and also to support their emotional and cognitive needs - the Club gives them all of this.

Closing the Club means to turn off the lights for the elderly who have given of themselves since the beginning of the State and even before.

We can not let this happen! Please give a hand to help! Together we can change this grim reality of shutting the elderly out of their refuge from loneliness and isolation, and allow them to live the rest of their lives with dignity and friendship.

Thats what I wrote for now- its just heartbreaking. One woman said that sometimes they dont have money for yarn (They knit at the club) so they look in the garbage for sweaters to unravel and use its yarn.

I was there the other day- the afternoon program has people between the ages of 75- 90 working on electronic cords- they get some pocket money One cried and said that if the club closes he has nothing to live for.

I am deeply concerned for the well being of these people as they will not have anywhere else to go if this avenue closes for them.
I was hoping that you might know an organization/ company/ private person that may want to assist.
I just need to find that one person that knows a person that knows of a company or somebody willing to help... They need $20,000 for a whole year of it being open... Maybe I need to find 20 people to donate $1000 each or even 200 people to donate $100... That might be easier..
Do you have any suggestions for me?
Thanks so much...

This is our facebook group. Please join us... https://www.facebook.com/RespectOurElderly

Posted by Love For His People ministry at 4:23 PM