Netanyahu Thanks Christians at CUFI Summit 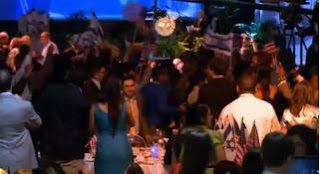 Netanyahu addressed the Christians United for Israel (CUFI) conference by satellite from Jerusalem.
"The bad news is that numbers count and we are a small people," Netanyahu told the crowd. "The good news is that Israel is not alone -- it has your support," he said.

The group held its seventh annual summit at the Washington Convention Center.

CUFI is the largest pro-Israel organization in America, with more than 1 million members.
The event attracted pro-Israel lawmakers, like Rep. Michele Bachmann, R-Minn, who had harsh words for the Obama administration.

"Without being partisan, this is the first administration where our commitment to Israel has ever even been questioned. That cannot stand because Americans stand by Israel," she said.

Cornerstone Church founding Pastor John Hagee, who established CUFI in 2006 and serves as its national chairman, told participants, "Those of you in this audience who stand in solidarity with Israel and the Jewish people, give a rousing shout of support that can be heard in Jerusalem, in Iran, and all the way to the White House."

Posted by Love For His People ministry at 10:03 AM