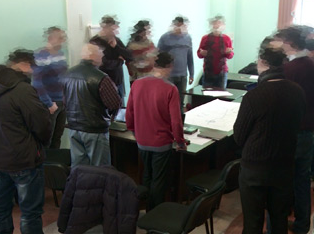 
BISHKEK, Kyrgyzstan: One-hundred-thousand Christians are murdered because of their faith each year. In many cases, governments are to blame because they pass laws that restrict religious freedom.

Recently, CBN News gained exclusive access to a gathering of secret believers inside a former Soviet Republic to get a close-up look at what life is like for Christians who face daily persecution.

The setting in the mountains of Kyrgyzstan could not have been more ideal.

"This is a beautiful location," Vitaly, a secret believer, said. "Seventy percent of the country is mountainous. Locals call it the second Switzerland of Asia. Our goal was to find a safe place away from the city to not draw attention of the authorities."

For a few days Vitaly and a handful of Christians gathered in a secluded villa tucked away in the mountains about a two-hour drive outside the capital city Bishkek.

"We worship, pray, and strategize how to effectively share the love of Christ in our countries," Vitaly said.

CBN News cannot show you their faces or reveal their real names for security reasons, but in a room inside a secret getaway are underground believers from Kyrgyzstan, Uzbekistan, Kazakhstan and Tajikistan. All are former Soviet Republics in Central Asia experiencing a rising tide of hostilities against believers.

They are members of a Christian ministry that's reaching young people in the former Soviet Union.

"It's practically impossible to openly share about Jesus Christ. Doing so will get you beaten, arrested, or killed," Vitaly warned.

But that has not stopped Marat, a youth leader from Uzbekistan, who said last year was a difficult year for him.

"Fortunately I wasn't arrested," Marat said. "But I was repeatedly interrogated by secret police accused of gathering people in my house. They said what I am doing is illegal."

"You can't relax. You are constantly under stress," he said. "You cannot trust anyone because you don't know if they'll turn you in or accuse you of proselytizing."

Doud is from Kazakhstan, the largest of the five Central Asian countries. There were no Kazakh Christians in 1990. Today there are about 15,000. But strict religious laws make it difficult for churches to register.

"According to our law you cannot attend church until you are 18 years old. That means we cannot hold youth meetings, discipleship classes or Bible study," Doud said.

One Life at a Time

Firuz is from Tajikistan. He gave CBN News exclusive access to home video of his secret house church that was smuggled out of the country. The meetings are small and typically held in a believer's home.

"The people in this video know exactly what's at stake," Firuz told CBN News in an undisclosed location. "Our parents taught us from childhood that one day we may have to sacrifice our lives."

Seven million people live in Tajikistan and only 1,000 are Christian.

"Each life counts," Firuz said. "God says, 'Be thankful every day, rejoice in every soul that comes into heaven.' That's what keeps us going: one life at a time."

Radical Islam On the Rise

Religious freedom exists in all five countries under the constitution, but barely. While Islam is the dominant religion, a more radical expression is taking root in Central Asia.

Dmitry Kabak is a human rights lawyer in Bishkek. He said fear of radicalism has led governments to adopt laws controlling all religions, including Islam and Christianity.

"Groups from Saudi Arabia, Turkey, and elsewhere come in with a different interpretation and practice of Islam. That worries the authorities. Some of the radical groups have engaged in terrorist activities," Kabak told CBN News.

Oleg works in remote villages of Kyrgyzstan. He remembers what it was like spiritually after the fall of the Soviet Union.

"There was a lot of freedom in the 90s. People could openly share the gospel. But eventually, Islam started to make a move and gain influence," he said.

An Oasis from Persecution

All throughout the mountain areas of Kyrgyzstan the horse is another popular mode of transportation, especially to get around some of the tough terrain and step hills.

For the believers, the mountains are a spiritual oasis because it is an opportunity to get away from the almost daily routine, harassment, and persecution from the authorities and to come together in a safe place, a beautiful place, and to get spiritually energized.

"The beauty, the backdrop, (and) the scenery (are) wonderful distractions from (their) daily challenges," Marat said.

"To see Kyrgyz, Uzbek, Kazakh, and Tajik believers in the same place at one time is so encouraging," Firuz said. "We draw strength from each other. We know we are not in this spiritual battle alone."

After being encouraged, refreshed, and re-energized, the believers must travel back home to the uncertainty of the days ahead.

Yet they stand boldly, convinced of a calling to make the name of Jesus Christ known -- no matter the cost.
Posted by Love For His People ministry at 7:17 AM