As Christmas neared, an 85-foot-high tree presided over the
little square in front of the Greek Orthodox Church of the
Annunciation in Nazareth. Kindergarten children with Santa Claus
hats entered the church and listened to their teacher explain in
Arabic the Greek inscriptions on the walls, while a group of
Russian pilgrims knelt on their knees and whispered in prayer.
In Nazareth's old city, merchants sold the usual array of
Christmas wares.

This year, however, the familiar rhythms of Christmas season
in the Holy Land have been disturbed by a new development:
the rise of an independent voice for Israel's Christian community,
which is increasingly trying to assert its separate identity. For
decades, Arab Christians were considered part of Israel's
sizable Palestinian minority, which comprises both Muslims
and Christians and makes up about a fifth of the country's
citizens, according to the Israeli government.

But now, an informal grass-roots movement, prompted in
part by the persecution of Christians elsewhere in the region
since the Arab Spring, wants to cooperate more closely with
Israeli Jewish society—which could mean a historic change in
attitude toward the Jewish state.

"Israel is my country, and I
want to defend it," says Henry Zaher, an 18-year-old
Christian from the village of Reineh who was visiting Nazareth.
"The Jewish state is good for us." 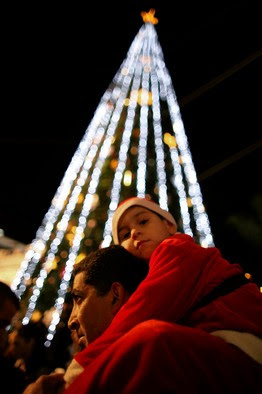 The Christian share of Israel's population has decreased
over the years—from 2.5% in 1950 to 1.6% today, according
to Israel's Central Bureau of Statistics—because of migration
and a low birthrate. Of Israel's 8 million citizens, about
130,000 are Arabic-speaking Christians (mostly Greek
Catholic and Greek Orthodox), and 1.3 million are
Arab Muslims.

In some ways, Christians in Israel more closely resemble
their Jewish neighbors than their Muslim ones, says
Amnon Ramon, a lecturer at the Hebrew University of
Jerusalem and a specialist on Christians in Israel at the
Jerusalem Institute for Israel Studies. In a recent book,
he reports that Israeli Christians' median age is 30,
compared with 31 for Israeli Jews and only 19 for
Israeli Muslims.

As a minority within a minority, Christians in Israel have
historically been in a bind. Fear of being considered
traitors often drove them to proclaim their full support
for the Palestinian cause. Muslim Israeli leaders say that
all Palestinians are siblings and deny any Christian-Muslim
rift. But in mixed Muslim-Christian cities such as Nazareth,
many Christians say they feel outnumbered and insecure.

"There is a lot of fear among Christians from Muslim reprisals,
" says Dr. Ramon. "In the presence of a Muslim student in one
of my classes, a Christian student will never say the same things
he would say were the Muslim student not there."

"Many Christians think like me, but they keep silent," says
the Rev. Gabriel Naddaf, who backs greater Christian
integration into the Jewish state. "They are simply too afraid."

In his home in Nazareth, overlooking the fertile hills of the
Galilee, the 40-year-old former spokesman of the Greek Orthodox
Patriarchate in Jerusalem is tall and charismatic, dressed in a
spotless black cassock. "Israel is my country," he says. "We
enjoy the Israeli democracy and have to respect it and fight for it."

That is the idea behind the new Forum for Drafting the
Christian Community, which aims to increase the number of
Christians joining the Israel Defense Forces.

It is an extremely
delicate issue: Israeli Arabs are generally exempt from military duty,
because the state doesn't expect them to fight their brethren among
the Palestinians or in neighboring Arab countries. Israeli Palestinians,
who usually don't want to enlist, say they often face discrimination
in employment and other areas because they don't serve.

"We were dragged into a conflict that wasn't ours," says
Father Naddaf. "Israel takes care of us, and if not Israel,
who will defend us? We love this country, and we see the
army as a first step in becoming more integrated with the state."

According to Shadi Khaloul, a forum spokesperson, the total
number of Christians serving in the Israeli military has more than
quadrupled since 2012, from 35 to nearly 150. This may seem a
drop in the ocean, but it was enough to enrage many Palestinian
Israelis. Father Naddaf says that his car's tires were punctured
and that he received death threats, worrying him enough that he
got bodyguards.

Hanin Zoabi, an Arab-Muslim member of the
Israeli parliament, wrote Father Naddaf a public letter calling him
a collaborator and accusing him of putting young Christians
"in danger." "Arab Palestinians, regardless of their religion, should
not join the Israeli army," Ms. Zoabi told me. "We are a national
group, not a religious one. Any attempt to enlist Christians is part
of a strategy of divide-and-rule."

Many Arab Christians don't see it that way. "We are not mercenaries,"
says Mr. Khaloul, who served as a captain in an IDF paratrooper
brigade. "We want to defend this country together with the Jews.
We see what is happening these days to Christians around us—
in Iraq, Syria and Egypt."

Since the Arab revolutions began in Tunisia in 2011, many
Christians in the region have felt isolated and jittery. Coptic
churches have been attacked in Egypt, and at least 26 Iraqis
leaving a Catholic church in Baghdad on Christmas Day were
killed by a car bomb. Islamists continue to threaten to enforce
Shariah law wherever they gain control.

The Christian awakening in Israel goes beyond joining the IDF.
Some Israeli Christian leaders now demand that their history and
heritage be taught in state schools. "Children in Arab schools in
Israel learn only Arab-Muslim history," says a report prepared
by Mr. Khaloul and submitted to Israel's Ministry of Education,
"and this causes the obliteration of Christian identity."

Some Israeli Christians even recently established a new
political party, headed by Bishara Shlayan, a stocky, blue-eyed
former captain in the Israeli navy who told me that he once beat
up an Irish sailor in Londonderry who called him an "[expletive]
Jew."

The new party is puckishly called B'nai Brith ("Children of
the Covenant"), and Shlayan says it will have Jewish as well as
Christian members. Nazareth's mayor, Ramez Jaraisy, recently
told the Times of Israel that Shlayan was a "collaborator" with
the Israeli authorities.

"The current Arab political establishment only brought us hate and
rifts," says Mr. Shlayan. "The Arab-Muslim parties didn't take care
of us. We are not brothers with the Muslims; brothers take care of
each other."

Mr. Shlayan, who advocates better education, housing
and employment for Israeli Christians, says he also dreams of turning
Nazareth into an even busier tourist spot by erecting the world's
biggest statue of Jesus.

Should this Christian awakening succeed, it would be yet another
notable shift in the balance of power among religious groups
in the Middle East.

—Mr. Schwartz is a former staff writer and senior editor
for the Israeli newspaper Haaretz.
Posted by Love For His People ministry at 7:41 AM