Canada's Harper: Why Single Out Israel for Criticism? - ISRAEL TODAY

Canada's Harper: Why Single Out Israel for Criticism? 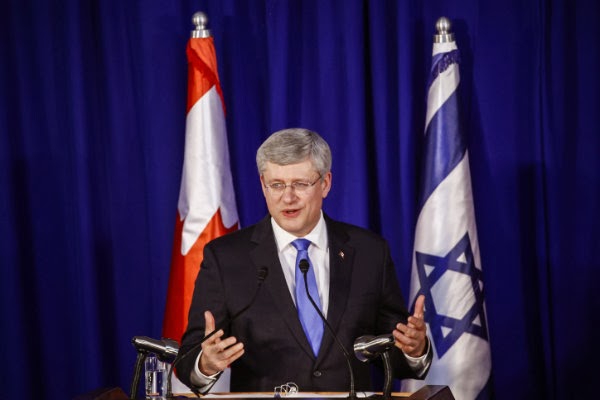 Harper went on to point out that Canada's readily available official policy opposes Jewish settlements, and that he is not constrained in expressing his government's differences with Israel when meeting with Netanyahu. But, Harper suggested, he sees no reason to make a public show of it.
When addressing the Knesset earlier in the day, Harper said he knew why exaggerated criticism of Israel had become so popular in the world today - it is the new haven for those who would in generations past have been labeled as anti-Semites.
"People who would never say they hate and blame the Jews for their own failings or the problems of the world, instead declare their hatred of Israel and blame the only Jewish state for the problems of the Middle East," he told Israel's gathered lawmakers. "...this is the face of the new anti-Semitism. It targets the Jewish people by targeting Israel."
Netanyahu also addressed the settlement question, reminding those present that "this conflict raged for half a century before there was a single Israeli settlement or Israeli soldier in Judea, Samaria and Gaza."
He reiterated that, as such, it was wrong to view the presence of Jewish communities as the "core of the conflict," a notion the Canadian government seems to grasp.
Want more news from Israel?
Click Here to sign up for our FREE daily email updates
Posted by Love For His People ministry at 12:15 PM