“And wine that maketh glad the heart of man, making the face brighter than oil, and bread that stayeth man’s heart.” (Psalms 104:15)

If you have ever been interested in tasting the wine drunk by King David or Jesus, now may be your chance. Following a growing interest in resurrecting the ancient winemaking practices of the region, winemakers at Recanati debuted a wine called marawi, made with grapes indigenous to the region, The New York Times reported.
The Recanati marawi is a crisp white wine released by the winery in October. The grapes were procured from Palestinian farmers, and only 2,480 bottles of the 2014 marawi were produced. They are available at just 10 restaurants in Tel Aviv. However, some 4,000 bottles of the 2015 marawi are aging currently, and the company hopes to plant its own vineyard of the varietal to expand and refine the brand.
The story begins with a groundbreaking project out of Ariel University in the Samaria region of Israel, which aims to to identify – and potentially recreate – the wines mentioned in the Bible. According to Eliyashiv Drori, the Ariel oenologist leading the research, marawi (also called hamdani) and jandali grapes can be traced to a reference in the Babylonian Talmud, dating back to 220 CE.
“All our scriptures are full with wine and with grapes — before the French were even thinking about making wine, we were exporting wine,” Drori told The New York Times. “We have a very ancient identity, and for me, reconstructing this identity is very important. For me, it’s a matter of national pride.”

The goal is to develop a unique Israeli wine, one that expresses the uniqueness of the region, rather than offering variations on wines of foreign origin, such as the French chardonnay.
Winemaking has a long history in Israel. Ancient presses have been discovered dating back as far as Biblical times. The local practices were lost, however, when the production of wine was outlawed by conquering Muslims in the 7th century. The industry was only restored in the 1880s, when Baron Edmund de Rothschild arrived, bringing French grapes with him. To this day, Israeli wines, which have become quite competitive in recent years, have been made from varietals brought in from other countries.
Drori, who has a PhD in agriculture, opened a small winery in 2005, called Gvaot, near his home. He noticed a neglected vine with small, very sweet white grapes and surmised they might make a tasty wine.
In 2011, he and a team of a dozen researchers began identifying local grape varieties with DNA profiles unique from imported grapes. Since then, they have identified 120 different local varieties, of which 50 were domesticated and 20 suitable for wine.


In addition, researchers have used DNA testing and a three-dimensional scanner on burned and dried seeds found at archaeological sites, revealing 70 unique varieties. The goal is to match the ancient seeds to living grapes or, failing that, reproduce the ancient varieties using genetic engineering.
Drori’s other task is demonstrating that the grapes he’s identified were used for wine, not snacking. For example, seeds found in donkey droppings in Timna, the site of King Solomon’s copper mines, were likely from pomace, the residue left from winemaking, since fresh fruit would not have been fed to animals.
But the Recanati marawi is not the only ancient wine gaining new life. Israeli vintner Avi Feldstein plans to debut another variety, called dabouki, along with his new winery, in the next few months. And Drori himself, with graduate student Yaakov Henig, has made his own wines at the university from the grapes the team has discovered.
The new wines are not without controversy, like anything in Israel. Palestinians claim the wines are their heritage, despite the fact that wine production is banned by Islam. However, Recanati vintner Ido Lewinsohn sees things differently. He told The New York Times his product is “clean and pure of any political influence,” adding of the grapes: “These are not Israeli; they are not Palestinian. They belong to the region — this is something beautiful.”

LOVE FOR HIS PEOPLE FEATURED BOOK 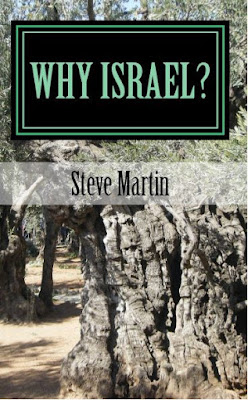 Why Israel? Why not?

This little booklet consists of messages previously written in my books, which of themselves contain many various themes. I wanted to devote one book to just Israel and the Jewish people, and so this small booklet was compiled.

As you read the following, consider the truth contained in Scriptures, from Genesis to Revelation, which spell out the commitment of God the Father to choose a people who will be a light to the nations. He chose the Jews, and gave them the Promised Land of Israel.

It does not matter what other national governments try to say, do, or accomplish apart from the plans and purposes of the Lord. They will fail. His Word is true. It is eternal. He is the same, yesterday, today and forever, and thus His commitment in keeping His promises made to the Jewish people will be fulfilled. I hope you stand with them in these last days.