Donald Trump: I Will Be the Greatest Representative for Christians They've Had in a Long Time - DAVID BRODY/THE BRODY FILE/CBN NEWS 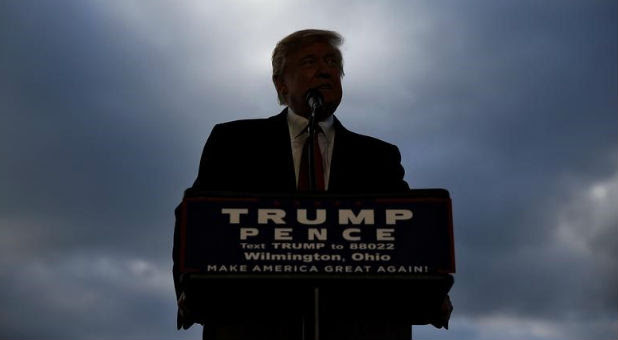 Donald Trump: I Will Be the Greatest Representative for Christians They've Had in a Long Time
11/18/2016 DAVID BRODY/THE BRODY FILE/CBN NEW
Before he was president-elect, Donald Trump sat down with CBN's David Brody to talk about issues Christians face both in the United States and abroad. As Trump prepares to take office, we're looking back at his religious liberty statements that eventually got him elected.
In an exclusive interview with The Brody File, Donald Trump says that if he runs for president of the United States, he will be the "greatest representative of the Christians they've had in a long time."
He says he's outraged over the fact that many Christians are stuck in Syria and Iraq even though they want to come to the United States.
Trump sat down with The Brody File in Iowa this past weekend. Watch the clip below along with a transcription.
David Brody: Conservative Christians are concerned about the deterioration of this culture. They are concerned about the marriage issue. What is your message to them on religious liberty and on religious freedom? What are your thoughts about that? What is your message to them specifically?
Donald Trump: Well, it's a very big message. As you know, I am Protestant. I am Presbyterian. Most people don't know that. They have no idea. I'm proud of it. I'm very proud of it.
One of the things I learned this weekend being in Iowa, I met with a lot of national security experts and everything else, that if you're a Christian living in Syria you can't come into this country. Yet, if you are a Muslim living in Syria, who are not under attack, they can come in.
But we have Christians being beheaded all over the world by ISIS. In Syria and in Iraq, in particular, those Christians can't come into this country.
You say what you want but this is really something. That's a lack of respect for us. If you're a Muslim, you can come into the country very easy. If you're from Europe and you're a Muslim, you can come in. But if you are from Europe and you're a Christian you can't come in, meaning it's almost impossible.
So you tell me about religious liberty and freedom. The Christians are being treated horribly because we have nobody to represent the Christians. Believe me, if I run and I win, I will be the greatest representative of the Christians they've had in a long time.
If you're wondering what Trump is referring to above, read these articles here and here to get up to speed on his thinking.
Brody File Analysis
Hey look, you may not think of Donald Trump and evangelicals as being the perfect fit, but that would be a lazy misread of the situation. I'm not saying Trump is a hit with all evangelicals. I know his egotism can rub some the wrong way. But let me clue you in to a little secret: Trump's ability to cut through the clutter and paint the world in "absolutes" attracts quite a few evangelical voters.
Remember, evangelicals hold true to their "biblical absolutes" so to see a person like Trump let it rip and tell it like it is becomes a somewhat endearing quality to some evangelicals. Trump takes hits for his boldness and evangelicals take hits from society for their biblical boldness too.
See the parallel? Those who think Trump would just be a presidential sideshow may want to think again if he jumps in. Let's be honest: He has a huge megaphone and so he's going to make news wherever he goes. Trump's challenge (if he gets in) will be to lay out a cohesive message that becomes less about him and his personality and more about the voters he's looking to attract.
I think a "Donald Trump Listening Tour Across America" would be in order. This way Trump makes voters the priority. It would throw the media off their tired narrative and give Trump the upper hand. Having the upper hand is always good in business negotiations and, to coin a phrase, it can also be the "art of the deal" in politics too.

The Brody File. Reprinted with permission from CBN.com. Copyright The Christian Broadcasting Network, Inc., All rights reserved.
3 Reasons Why you should read Life in the Spirit. 1) Get to know the Holy Spirit. 2) Learn to enter God's presence 3) Hear God's voice clearly! Go deeper!
Has God called you to be a leader? Ministry Today magazine is the source that Christian leaders who want to serve with passion and purpose turn to. Subscribe now and receive a free leadership book.
Posted by Love For His People ministry at 1:14 PM