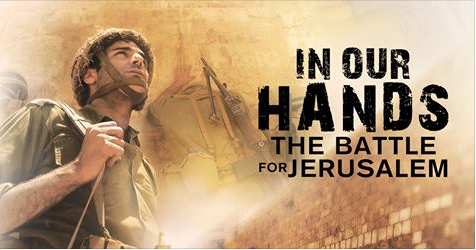 June 1, 2017 - Special Encore Presentation.
Buy tickets here.
Fifty years ago, a miracle happened. Israel defeated their neighbors in what has become known as the Six-Day War and reunified Jerusalem for the first time in approximately 2,000 years.
Gordon Robertson of CBN had the vision to create a docudrama drawing from the actual journals, recordings and interviews with survivors of what happened in faithful hours. It is showing on Tuesday, May 23, in more than 700 theaters around the country—for one night only.
I had the privilege of screening the movie in advance, and it is excellent, which you can tell from the trailer here. It tells the story from the Jewish perspective and reveals a great deal of little-known but very interesting information, such as how the soldiers who took the Temple Mount were actually reservists rather than an elite military team. The film also gives some insight into the personalities of some of those involved.
I was pleased to interview Robertson on my "Strang Report" podcast, which you can listen to below. He talks about how the Six-Day War is a fulfillment of Luke 21:24 (MEV), "And Jerusalem will be trampled on by the Gentiles until the times of the Gentiles are fulfilled."
In 1967, Gordon was only 9 when his father, Pat Robertson—who has been a strong supporter for Israel for decades and is a real student of Bible prophecy—sat the family down and told them the significance of what was happening in the Six-Day War.
On our calendar, the anniversary of the beginning of The Six-Day War is June 5, but because the Jewish calendar is different, it is actually May 23 when the Jews celebrate Jerusalem Day worldwide. This significant day, Yom Yerushalayim, is the day the movie is being released.
President Donald Trump had planned a major speech from Masada—the site in the Judaean wilderness where Jews fought the Romans until the last person died. Instead, the speech will come at the Israel Museum in Jerusalem (the location hadn't changed when the podcast was recorded). This is the first international trip of his Trump's presidency, and he obviously picked this date because of the significance to the Jewish people in order to make a point.
Sadly, the Obama administration almost seemed more sympathetic toward Israel's Arab enemies than it did to Israel. In the closing days of Obama's administration, the United States abstained from vetoing a United Nations resolution that condemned Israel for "occupying" the West Bank, which includes East Jerusalem.
As Gordon points out in the podcast, the Six-Day War is more than politics. It was God Almighty who prophesied in His Word that this war would happen. For Christians, it is also significant because the area being disputed is also the sight of the Holy Sepulchre, the Garden of Gethsemane and the City of David.
While the prophecy in Luke 21:24 was fulfilled in 1967, Gordon explains there is another great prophecy—that all the nations of the world will assemble against Jerusalem (Zech. 14:2). This is something that is obviously very serious and, as a strong supporter of Israel, I hate to think the United States would ever align with the enemies of Israel to oppose that country.
I plan to personally invite some Jewish friends to see the movie with me next Tuesday, and I urge you to do the same. In fact, you can get group tickets by visiting inourhands1967.com.
I congratulate Gordon Robertson and his team on an excellent project. The timing is incredible. My hope is that this movie will help reveal to those who may be on the fence regarding the Israel-Arab conflict how God's hand is on the nation of Israel and on the events of 1967.
Please share this on social media as well as with members of your church and others in your circle of influence, and let's pack out those theaters on Tuesday, May 23.

"In Our Hands" Movie Marks 50th Anniversary of 1967 Battle for Jerusalem
The brave men of the 55th paratrooper brigade changed the course of history in 1967. Hear Gordon Robertson share about the movie, "In Our Hands," which retells the story of these men and the impact of the Six-Day war. Listen to find out how you can see the movie.
Steve Strang is the founder of Charisma and CEO of Charisma Media. Follow him on Twitter or Facebook.
Charisma's Special Anointing Bundle. Get Charisma magazine plus these 2 Books - The Deborah Anointing & The Esther Anointing for only $24.97. Subscribe Now!
Hearing God's voice changes everything. You'll gain clarity, purpose and direction for your life. Start your journey to live your Life in the Spirit. Click here to draw closer to God!
Posted by Love For His People ministry at 4:44 PM