Tens of Thousands of Jewish Books Damaged in Hurricane Buried

Tens of Thousands of Jewish Books Damaged in Hurricane Buried 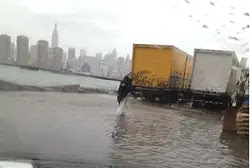 Sandy Hits NY
Ze'evi Fried, New York
A mass funeral was held this week for Jewish holy books destroyed and damaged by Hurricane Sandy last month. The funeral was held in the Far Rockaway area of Queens, which experienced some of the worst damage from the storm.


The funeral – in which a caravan of three trucks carrying books, , Talmud volumes, and other holy in the storm in New York and Long Island – was a mass genizah burial. Holy books that can no longer be used are buried in a special area of a Jewish cemetery, given the honor of a funeral due to their holiness.

The procession left from Yeshiva Mercaz HaTorah in Far Rockaway. Tens of thousands of books had been collected by organizations and individuals for the event. Students of the Yeshiva and other educational institutions, as well as residents of the neighborhood and visitors from around the New York area, participated in the event. Jewish-owned businesses in the area closed for the period of the funeral.

After prayers and speeches discussing the Jewish point of view on the events experienced by residents of the New York area last month, the books were taken to a Jewish cemetery in New Jersey for burial.

http://www.israelnationalnews.com/News/News.aspx/162603
Posted by Love For His People ministry at 8:47 AM