Tiferet Yisrael, which was destroyed by the Jordanian Army in 1948, will dominate Old City’s skyline

The ruins of the Tiferet Yisrael Synagogue in the Old City of Jerusalem, on November 28, 2012 (photo credit: Yonatan Sindel/Flash90)

The Jerusalem Municipality on Wednesday announced plans to rebuild the historic Tiferet Yisrael Synagogue in the Old City.
The iconic three-story domed structure, which once dominated the skyline of the Jewish Quarter, was dedicated in 1872 but destroyed by the Jordanian Army after it captured the Old City during Israel’s 1948 War of Independence.

The Tiferet Yisrael Synagogue, circa 1940

The synagogue is currently in ruins, with only one wall remaining. The rebuilding will take three years and cost NIS 50 million (about $13 million), with most of the funding coming from private donors. Due to its elevation, when completed the synagogue will be the highest structure in the Old City.

“The municipality sees great importance in preserving and rebuilding Jerusalem’s heritage sites. The Tiferet Yisrael synagogue was a symbol of the Jewish Yishuv [pre-state settlement] in Jerusalem and we are proud to bring it back and rebuild it anew,” said Jerusalem Mayor Nir Barkat in a statement. 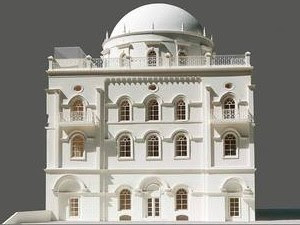 Although the municipality has approved the construction, the project still needs to be green-lighted by the Interior Ministry.

Another iconic Old City synagogue destroyed in 1948, the Hurva, was rededicated in 2010, amid protests by Palestinian factions objecting to Israeli construction in the Old City.

http://www.timesofisrael.com/historic-synagogue-to-rise-anew-in-jerusalem/
Posted by Love For His People ministry at 8:49 AM