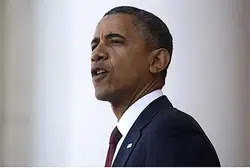 Israel's Ambassador in the United States, Michael Oren, told IDF Radio Tuesday that there is no American veto on a possible ground maneuver by the IDF in Gaza.

"Washington's support in any Israel takes is full," he said. "Obama spoke twice with the prime minister and called our situation 'unbearable.'"

Minister of Home Front Defense Avi Dichter refused to say Tuesday whether Israel and Hamas are headed toward a ceasefire or more intensive hostilities. "The probability of an arrangement in the face of requests and pressure is identical to the probability that the operation will be ratcheted up," he told the military station.

U.N. Secretary-General Ban Ki-Moon said Tuesday that "A ground incursion into Gaza by Israel would be a dangerous escalation and it should be avoided." He added, though, that "Israel has legitimate security concerns and they should be respected."

http://www.israelnationalnews.com/News/News.aspx/162318
Posted by Love For His People ministry at 12:47 PM