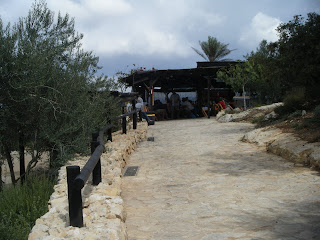 Yad Hashmona (Photo by Steve Martin)
﻿
A court ruling penalizing the Israeli Messianic village of Yad Hashmonah for refusing to host a lesbian wedding has severely damaged the community's main source of income, but has also opened the door to be an even greater witness to the Israeli public.

Founded by Finnish Christian Zionists in the 1960s, Yad Hashmonah is today a focal point of the Israeli Messianic movement. It is also home to a beautiful guest house, event hall and biblical garden that are frequented by Israeli visitors.

That is, they were frequented by Israeli visitors until earlier this year, when a Jerusalem court slapped the village with a large fine after it turned down a lesbian couple that tried to get married there three years earlier.

At the time, Yad Hashmonah explained to the couple that the biblical faith of the village prevented them from hosting such an event. The Jerusalem court said this amounted to harassment and discrimination, and Israel's homosexual community rejoiced in their victory over Bible-believers.

Meanwhile, Yad Hashmonah has had to all but shut down its booming business for fear that gay and lesbian weddings would be booked on a weekly basis in an effort to finish off the village.

"Our business is suffering badly," spokeswoman Ayelet Ronen told Israel Today. "We are firing people and cutting every expense possible."

But that's not the end of the story.

At the same time, Ronen exclaimed, "God is really using this!"

Since the court decision, and the initial negative press coverage it spawned, Ronen has been interviewed by three newspapers, two radio programs, and Israel's leading morning TV news show. And then there have been the phone calls from random Israelis.

"I have been flooded with calls from people wanting to know more about the situation, asking about our faith and offering moral support," said Ronen.

This new wave of positive coverage, which has afforded Ronen numerous opportunities to witness directly to Israelis, started with a lengthy article in Makor Rishon, Israel's leading religious newspaper.

The Makor Rishon piece was very positive, giving a bit of background on the Christian Zionist beginnings of Yad Hashmonah and fully siding with the village in its decision to turn down homosexual events on biblical grounds. Perhaps more importantly, however, this religious newspaper clearly identified Messianic Jews like Ronen and the residents of Yad Hashmonah as belonging firmly in the camp of Bible-believing, conservative Jews.

Israeli Messianics have struggled for decades with widespread accusations that their faith in Yeshua means they are no longer Jews. The reactions to the Yad Hashmonah issue are further evidence that this attitude is changing.

As for the village and the future of its primary business, Ronen said the recent media coverage had gotten the attention of a senior Israeli judge who feels that justice was not done in Yad Hashmonah's case.

In the meantime, Yad Hashmonah is hoping to replace the loss of Israeli visitors with Christian groups visiting the country. Nestled in the hills just outside Jerusalem, Yad Hashmonah certainly offers a unique experience for Christians.

To learn more about Yad Hashmonah, visit their website: www.yad8.com