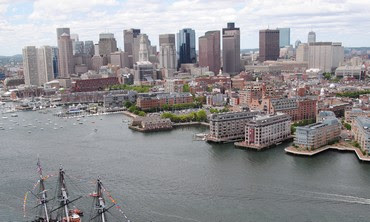 
Approximately 1,000 people rallied in Boston on Monday evening to show their support for Israel during Operation Pillar of Defense – one of many pro-Israel solidarity events held across the region and across the country.

Boston’s event was a joint effort organized by a dozen synagogues, schools, and Jewish nonprofit organizations: the Combined Jewish Philanthropies, the Jewish Community Relations Council of Greater Boston, J Street, the Anti- Defamation League and AIPAC, among others.

“Part of the reason for the rally is there’s a battle for American public opinion and world opinion, and we play a part in that battle,” said Rabbi David Lerner of Temple Emunah in Lexington, one of the congregations co-sponsoring the event.

“It’s a statement to our sisters and brothers and cousins in Israel that we’re supportive and we feel your pain,” he said.

Patrick visited Israel in March 2011 as part of an “innovation economy mission” to strengthen ties between hi-tech companies in the Boston region and Israel. He has attended many pro-Israel events in the past.

CJP president Barry Shrage did not attend Monday’s event as he rushed off to Israel on Saturday night to express his solidarity in person.

Shrage spent Monday driving around the South and paying a condolence call in Kiryat Malachi for the victims of rocket attacks killed last week.

“I like to have a presence here whenever Israel is in trouble,” Shrage said in a telephone interview ahead of the rally.

“A problem for them is a problem for us too. In my experience, when you are in Israel and visiting and talking to them, the broader nation appreciates that someone is coming to town and not staying away,” he said.

Jewish Community Relation Council executive director Jeremy Burton noted that American Jews have a responsibility to combat the skewed media coverage of the conflict, the day after news of the deaths of 11 members of a single family in an Israeli air strike against Hamas in Gaza dominated headlines.

“There is important work for those not in Israel about telling the world what is going on and the untenable situation that Israel is dealing with,” he said. During the rally, demonstrators heard from Israelis temporarily living in Boston about their experiences. Burton said he hoped to encourage demonstrators to engage on social media and to thank the political leaders who have expressed unwavering support for Israel, including members of Congress.

Burton added that the event, which was thrown together in two days, also allows Bostonians to feel like they're taking action during a time when they’re worried about friends and family in Israel.

“The community understands this is a time to stand with Israel,” he said.

http://www.jpost.com/International/Article.aspx?id=292653
Posted by Love For His People ministry at 8:43 AM