Only 8 stood with Israel 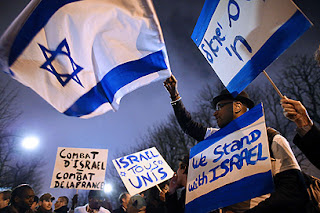 Israel, Canada, Panama, the Czech Republic and four tiny Pacific island states were the only ones in the 193-member U.N. General Assembly siding with the U.S. in its quixotic vote against the Palestinian Authority’s request for nonmember observer state status. France, Italy, Spain, Norway, Denmark and Turkey were among the U.S. allies joining the majority in the 138-9 vote, with 41 abstentions.
Posted by Love For His People ministry at 9:26 AM

Email ThisBlogThis!Share to TwitterShare to FacebookShare to Pinterest
Labels: Canada, Palestine, UN vote, US, We stand with Israel