Netanyahu: 'It's our Right to Defend our People'

Netanyahu: 'It's our Right to Defend our People'


By Chris Mitchell and Julie Stahl 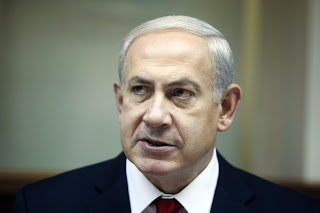 JERUSALEM, Israel -- Israel is mulling stronger military action after a spike in Palestinian rocket attacks from the Gaza Strip on southern Israeli cities.


Part of Israel's preparation is informing the international community what Israelis are facing on a daily basis.
Israeli Prime Minister Benjamin Netanyahu briefed some 70 foreign ambassadors and diplomats in the southern Israeli coastal city of Ashkelon, well within range of rockets from the Gaza Strip.

"If an alarm is sounded, all of us have exactly 30 seconds to find shelter," Netanyahu told the diplomats.
The invitation came as more than 120 rockets pummeled southern Israel in a 48-hour period, scoring several direct hits, closing schools, and sending shock waves throughout the south.

"This is the situation in which 1 million Israelis find themselves in," Netanyahu continued. "That's families, old people, children, babies…(who) are targeted on a daily basis by people who took areas that we vacated, that the government of Israel vacated, came in there, and are now hiding behind civilians, while firing on civilians, firing on our children."

The diplomats were shown video of what it's like to run for cover and wait for the explosions.
Since 2001, nearly 13,000 rockets and mortars have landed in Israel, more than 8,000 of them since the government's 2005 pullout from the Gaza Strip.

"This is made in foreign countries such as Iran and China, and which smuggled in through Rafah crossing, makes its way through Egypt, into Israel, into the Gaza Strip, and then fired directly into the southern part of Israel.

Besides the rockets, Israel often battles the international pressure to exercise restraint, but many Israelis are saying enough is enough.

Netanyahu said Israel would fight for the right to defend its people.

"We'll take whatever action is necessary to put a stop to this. This is not merely our right, it's also our duty, and it's something that I think is understood not only by you, who are here in Ashkelon today, but by any fair-minded person in any fair-minded government in the world. They would understand that it's our right to defend our people, and this is what we shall do," he said.

Posted by Love For His People ministry at 2:12 PM