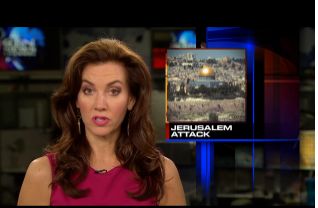 RISHON LEZION, Israel - Israeli security officials have confirmed to CBN News that at least one rocket fired from Gaza landed somewhere near the Gush Etzion community in the West Bank southwest of Jerusalem.

This is the first Gaza-launched rocket to reach the environs of Israel's capital.
Earlier, sirens sounded for the second straight day in the metropolitan area of Tel Aviv. The armed wing of Hamas has claimed responsibility for the attacks.
No damage or injuries have been reported in Tel Aviv or Jerusalem, and officials now say that the rocket near Tel Aviv did not land, suggesting that it was shot down by Israel's Iron Dome defense system.
How troubling is it that Gaza rockets have reached Jerusalem? CBN News' John Waage, who has spent years covering the Middle East in our Jerusalem Bureau, has more. And will Egypt stand with Israel as it has in the past? Sr. International Reporter Gary Lane explains what to expect this time around, following this report.

Meanwhile, Palestinian rockets continued to fall on southern Israel Friday as the Israel Defense Forces ramped up its bombardments of terror sites.
The key for Israel, say residents, is to allow the country to finish the job.
Panic in Tel Aviv
Air raid sirens sounded in Tel Aviv Thursday for the first time since the 1991 Gulf War, snarling traffic and sending shock waves through the center of the country.
"The alarm -- some of us got panic (ked). I was in the street. I saw people run and trying to call their families. A few seconds later, it was normal," one Israeli teen, Adir Joseph, recalled.
"And in Tel Aviv it was also," Eden Kabaso, 16, said. "My sister lives there. When there was an alarm she got panicked. She cried. She was also in the street with her kids and it was not a comfortable situation."
One rocket reached farther north than ever before -- some 30 miles to the southern Tel Aviv suburb of Rishon Lezion.
What do Christians need to understand about the spiritual battle at play here? CBN News' John Waage has more on Christian World News below (link at bottom of this feature story.)
"Everybody freaked out. It was crazy. It was the first time here in Rishon LeZion," Rafi Mor, a Rishon Lezion shop owner, said.
The army says in the last 36 hours they've struck more than 500 terror sites. Israelis in Rishon Lezion say their country should keep up the pressure.
"There's no way the people from the south have to endure all those missiles day after day after day," resident Omer Shani said. "There is no country in the world that will have -- that could have -- understood it. It can't go on. It just can't go on."
Mor agreed. "I think we should have done this step a long time ago," he said. "I think we should solve the problem over there for a long time now. The army needs its time to do its job and finish the work over there."
Tel Aviv area resident Ayelet Shoshani said, "I think they need to do more. Now, after what happened yesterday, I can feel (it) -- I don't know how people in the south live, I don't know. I think I would get mad to live like that. I don't think we can get used to that kind of life. It's very difficult."
"Don't stop until they are quiet," Rishon Lezion resident Ruthi Schlosser said. "They should go on and beg for (a) ceasefire because it can't continue like that. We are very happy here you know in the midst of Israel, but poor people who are living there, their life must be hell.
Israel agreed to hold its fire during Egyptian Prime Minister Hesham Kandil's visit to Gaza on Friday, but rockets continued to slam into southern Israeli communities.
More than 300 rockets have hit Israel in less than 48 hours. Some 130 more have been intercepted by the Iron Dome anti-missile battery.
In the past, pressure from the international community has forced Israel to stop before it says it has accomplished its goals. But Prime Minister Benjamin Netanyahu says it won't happen this time.
http://www.cbn.com/cbnnews/insideisrael/2012/November/Gaza-Renews-Rocket-Fire-as-Israel-Ramps-Up-Offensive/
Posted by Love For His People ministry at 8:55 AM