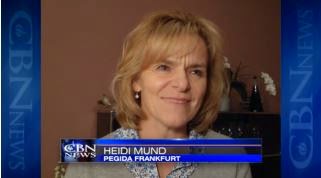 Battle Is His: 'Brave German Woman'

Friday, January 30, 2015
Heidi Mund is a Christian German woman with a passion to stop the spread of radical Islam across Europe.

More than a year ago, Mund went to a church service where a Muslim imam was invited to give a call to prayer.

She shouted, "Jesus Christ alone is Lord of Germany; I break this curse."

Now, Mund, known as the "Brave German Woman," said she is facing backlash for her bold proclamation and her involvement with the group Passionate Europeans Against the Islamization of the West (PEGIDA).

Mund said she has been called a "nazi" for her affiliation with the group. On Monday, she said thousands of people showed up to protest the PEGIDA demonstration in Frankfurt.

"They threw eggs on us and tomatoes and firecrackers; it was really dangerous," Mund told CBN News.

Mund, a former atheist, said she is not afraid because God is with her.

Watch what she told CBN News' Charlene Aaron and why she is asking for your prayers.

Posted by Love For His People ministry at 7:01 AM