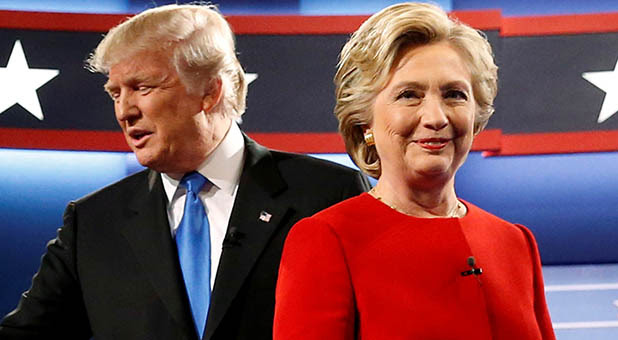 The Moral Choices of the 2016 Election
9/29/2016 DAVE KUBAL/INTERCESSORS FOR AMERICA Charisma nEws
The choices of this year's election season pose some significant moral challenges. I have heard that Christians are struggling with the values of the Democrat party: the so-called "pro-choice" position, which means, in virtually 100 percent of cases, pro-abortion; limiting religious freedoms; more government control over citizens' lives; and more. And I have also heard Christians who are struggling with the morality of voting for a brash, twice-divorced, casino-owning presidential candidate.
These are real struggles, and I don't intend to minimize the pressure under which some sincere and concerned Christian voters are struggling. Let me ask you to consider the morality of a third option I'm hearing, and that is voting for a third party candidate or not voting at all. I have lumped these last two together because the reality is that the action of taking no action by Christians would certainly guarantee a U.S. president whose party platform will not protect life in the womb, will not support religious freedom, and will force you to forsake your traditional Christian values or face legal punishment if you resist caving in to the anti-God atmosphere across the nation. Those will be only a part of the negative results. I can guarantee it.
Edmund Burke (1729-1797) is known for his now-famous saying: "The only thing necessary for the triumph of evil is for good men to do nothing." You will be faced with a moral decision on November 8, 2016, our national Election Day. You may vote for liberal values, vote for an unknown candidate who has, to many conservatives, questionable qualifications, or vote for a third-party candidate who cannot win and will thus, by default, add to the pro-liberal victory. By staying home, you will help liberal values to prevail.
However, without telling anyone whom to vote for, I do have a suggestion for overcoming this dilemma: Focus on the political parties' platforms. Delegates of both major parties worked hard through discussion and debate to construct their respective platforms with the solid planks that outline and support their party's core values. These platforms were approved at each convention. And the platforms are not secret documents. My suggestion for every Christian potential voter: Read both platforms and consider them plank by plank, value by value. Then consider supporting with your vote the one that best reflects your own values. Here is a link to our helpful 2016 Presidential Election Voters Guide that outlines the Republican and Democrat party platforms along with suggestions for prayer.
We cannot change the fundamental strengths or flaws in any candidate, but we can identify with the platform principles that will guide the elected officials' governance—from Congress to the U.S. President.
Yes, it may be a tough decision. I hope my suggestion offers some clarity.
Dave Kubal is president of Intercessors for America.

3 Reasons Why you should read Life in the Spirit. 1) Get to know the Holy Spirit. 2) Learn to enter God's presence 3) Hear God's voice clearly! Go deeper!
Has God called you to be a leader? Ministry Today magazine is the source that Christian leaders who want to serve with passion and purpose turn to. Subscribe now and receive a free leadership book.
Posted by Love For His People ministry at 6:55 AM