U.S. Embassy Move to Jerusalem Could 'Open the Gates of Hell' - SHAWN A. AKERS CHARISMA NEWS 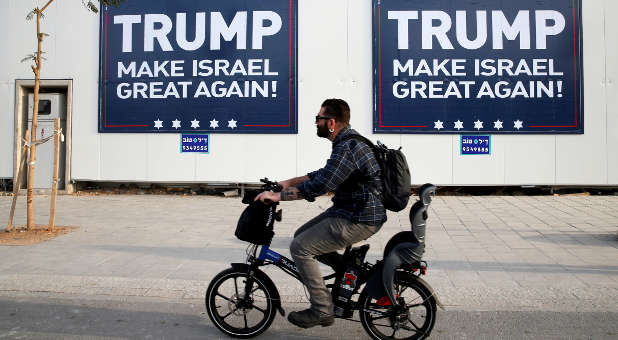 U.S. Embassy Move to Jerusalem Could 'Open the Gates of Hell'

President Donald Trump's opposition for moving the U.S. Embassy in Israel from Tel Aviv to Jerusalem isn't simply limited to Palestinians and factions within the United States government. The notion has awakened an old enemy who sees the potential move as a prelude to war, World News Daily has reported.
WND reports that Iraqi cleric Motqtada al-Sadr, instrumental in forming militia against U.S.-led coalition forces in Iraq, is calling for "the formation of a special division to liberate Jerusalem were the decision to be implemented."
Sadr said Tuesday in a statement, "Transferring the U.S. Embassy to Jerusalem would be a public and more-explicit-than-ever declaration of war against Islam."
Palestinians hold East Jerusalem sacred as the third holiest city in Islam. It is also viewed as the future capital of a Palestinian state.
Sadr also called for the immediate closure of the U.S. Embassy in Iraq, and said in his statement that the Arab League as well as the Organization of Islamic Cooperation, the world's main pan-Islamic body, should "take a decisive stand on the issue or disband."
WND reported that Palestinian Authority President Mahmoud Abbas has said that if the U.S. Embassy moves, he could "revoke the PLO's recognition of Israel" and that his Fatah Party, formerly led by Yasser Arafat, would "open the gates of hell."
The U.S. Embassy in Israel has always been in Tel Aviv despite the fact that the Jerusalem Embassy Act, passed by the Senate and House by wide margins in 1995, declared "Jerusalem should be recognized as the capital of the State of Israel," and the U.S. Embassy should be established there "no later than May 31, 1999."
Since then, WND reports, every U.S. president—Bill Clinton, George W. Bush and Barack Obama—has signed a waiver every six months, citing "national security concerns." The U.S. has aligned itself with the United Nations policy that does not recognize Israel's annexation of East Jerusalem after the city's capture in the Six-Day War in 1967.
Jewish prayer on the Temple Mount in East Jerusalem is completely forbidden by Israeli law. Jews may enter only to visit and only at limited times. Muslims are free to pray on the Temple Mount, while Christians and Jews may only visit the site as tourists, forbidden to sing, pray or make any kind of religious display.
Trump's Mission in Israel
Attempting to rebuild a damaged U.S. relationship with Israel that occurred under the Obama administration, Trump vowed during his presidential campaign to move the embassy to Jerusalem "very quickly" after his election. In its first week in office, the Trump administration announced it would be making the move. But, White House Press Secretary Sean Spicer told reporters earlier this week that no decision had been made.
Caroline Glick, a former assistant foreign policy adviser to Israeli Prime Minister Benjamin Netanyahu, wrote on carolineglick.com that "there is no single step the U.S. can take that will do more to rebuild U.S. credibility as an ally than moving the embassy to Jerusalem. By taking the step that none of his predecessors would take to stand in support of the U.S.'s most embattled ally worldwide, Trump will show that America can again be trusted."
The Jerusalem Post reported this week that Jerusalem Mayor Nir Barkat is behind the Trump administration all the way. "Trump has proven that he is a true friend of the state of Israel and keeps his promises," Barkat said in a statement.

Leaders are readers! Subscribe now and get 3 magazines for the price of 1. Get Ministry Today, Charisma and SpiritLed Woman all for $24. YES - Sign me up!
3 Reasons Why you should read Life in the Spirit. 1) Get to know the Holy Spirit. 2) Learn to enter God's presence 3) Hear God's voice clearly! Click Here to draw closer to God!
Did you enjoy this blog? Click here to receive it by email.
Posted by Love For His People ministry at 6:42 AM