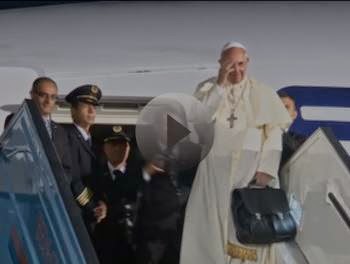 JERUSALEM, Israel -- Pope Francis flew back to Rome Monday after a three-day tour of Jordan, Israel and Bethlehem. He'll soon host a meeting with the Israeli and Palestinian presidents. But he left with a reminder that his efforts are what he called spiritual, not political.

Near the end of his visit, the pope said mass and greeted Christians at the Garden of Gethsemane.

"I think he is a man that's going to do much good in uniting the churches," said Colleen Doyle, a tour guide of a Christian group from New Zealand.

During his visit, Francis told the Christians living in Jerusalem he understood their difficulties and invited them to be courageous witnesses of the resurrection of Jesus.

How significant is it that Pope Francis made this pilgrimage? Arina Grossu with the Family Research Council answers this and more, on CBN Newswatch, May 27.

"We protect the rights of Christians in Israel. That, unfortunately, does not exist in many places in the Middle East. Even in Bethlehem, where your Holiness visited, Jesus' birthplace, has become a Muslim city," he said.

Netanyahu also referred to the stop Francis made at the security barrier between Bethlehem and Jerusalem.

"When incitement and terror against Israel stops, there won't be a need for things like the security fence [the West Bank barrier], which has saved thousands of lives," he said.

On his way back to Rome, the pope clarified his invitation to Israeli President Shimon Peres and Palestinian Authority President Mahmoud Abbas to pray together at the Vatican.

"It will be a prayer meeting; it will not be for mediation or to look for solutions. No. We will meet together to pray only, and then each one will return home. But I believe that prayer is important. Praying together with[out] doing any sort of arguing, this helps," the pope said on Tuesday.

The gathering of Israeli and Palestinian leaders is scheduled to take place in Rome in early June.
Posted by Love For His People ministry at 6:05 PM