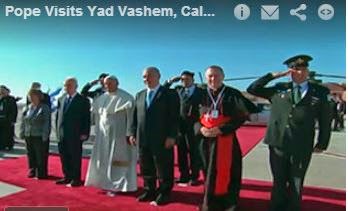 The pontiff's trip is the third papal visit to Israel since the year 2000. He came with the goal of building bridges -- within the church, between faiths -- and bridging the political divide between Israelis and Palestinians.

Francis issued a surprise invitation to both Peres and Palestinian Authority President Mahmoud Abbas to pray together at the Vatican. Both accepted and plan to come to Rome in early June.

On the last day of his two-day visit, Francis prayed at the Western Wall in the Old City and visited Yad Vashem, Israel's Holocaust Memorial, where he met with Holocaust survivors and prayed, "Never again Lord, never again."

One major reason for the Pope's visit is to sign a joint declaration with Barthlomew, the patriarch of the Greek Orthodox Church. The declaration marks the 50th anniversary of the end of a rift between the Eastern and Western Christian Churches, which began nearly 1,000 years ago.

"Your Holiness, in the heart of the Middle East, the turbulent and violent Middle East, where Christians are often persecuted, Israel is an island of tolerance," MK Rabbi Dov Lipman told CBN News. "We also hope he basks in the holiness of Jerusalem and also recognizes the importance of a unified Jerusalem where there's access for all faiths to their places of worship."

During his visit, Pope Francis called for a two-state solution. That means a divided Jerusalem since Palestinians also want the city as their capital.

Posted by Love For His People ministry at 6:25 PM